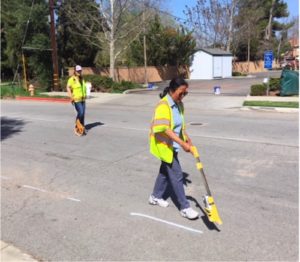 Photo from The City of Paso Robles Newsletter, vol. 68.

—The contractor of the West Side Slurry Seal Project, which encompasses downtown district roads and west side residential areas, is preparing to conduct the final slurry seal coat stage. Before the final coat can be placed, Ditas Esperanza, the Capital Projects Engineer and Kristin Ferravanti, the Capital Projects Assistant Engineer, are marking about 80,000 square feet to indicate dig-out repairs.

The City of Paso Robles Newsletter, vol. 68, released a list of streets scheduled for repair which include: