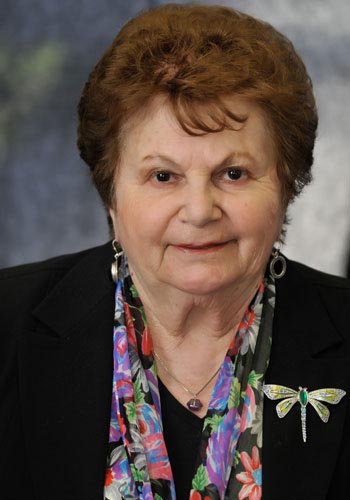 –Norma Moye celebrated her birthday Thursday, July 2, at the Paso Robles Downtown Main Street Association, where she still works most every day.

Norma Della was born to an Italian-American father and mother. She says her dad left Italy when Mussolini came into power. Norma grew up in Paso Robles. For the last several decades, she has coordinated countless Main Street sponsored activities at the Downtown City Park.

Thursday, she received calls from several old friends, one of whom she identified as Janice Lewin. Janice advised Norma on the phone, “My last name has not been Lewin for 61 years.”

Janice reminded Norma of a sorority they formed in high school called “Della Ate a Cow Pi.” Janice said, “We inducted a number of girls into the sorority. I still remember the initiations we imposed on those poor girls. One girl, Enid, we put in a big cardboard box and tied a bow around it. We left the box on the doorstep of a boy’s house and rang the doorbell. Another, Carol Lange, we sent to the Melody Bar to order a milk-shake. When she finished, she told them she didn’t have any money to pay. We did all kinds of terrible things.”

Norma plans going to have lunch on Saturday with her son Vince Vanderlip, and her daughter, Patty Baldwin.