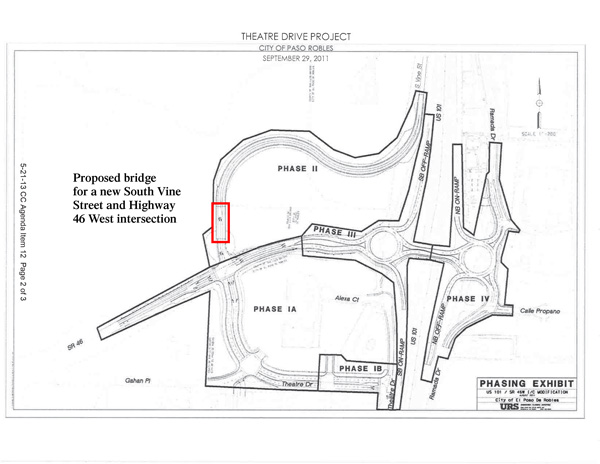 The Paso Robles City Council in May awarded a contract to design the South Vine Bridge, northerly extension of Theatre Drive, at Highway 46 West.

The city prepared an environmental document and Project Study Report for ultimate improvements envisioned at the intersection of State Highway 101 and 46 West.

The project and environmental documents were approved by Caltrans in 2009. The approval allowed the improvements to be constructed in phases as illustrated on the attached exhibit.

The City received an Urban State Highway Act (USHA) regional grant in the amount of $400,000 from the San Luis Obispo Council of Governments (SLOCOG) to be used for the next phase of work at 101/46W.

After issuing a Request for Proposals (RFP) to design the bridge portion of South Vine, three firms responded to the RFP. Staff reviewed the proposals and determined that Penfield & Smith provided the most comprehensive response and met the requirements of the City’s RFP.

City staff met with Penfield & Smith and developed a final scope and fee in the amount of $173,884 to design the bridge portion of the South Vine realignment.

Once the design work for the bridge is complete, staff will request to use any remaining from the $400,000 for the next phase of work at 101/46W.