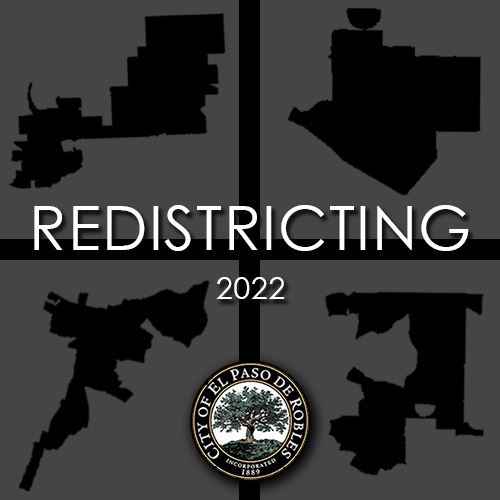 –The City of Paso Robles will be considering possible changes to its four City Council election districts in advance of the 2022 election and is asking for resident input. The process will include four public hearings between now and April of 2022. The first public hearing will take place at 7 p.m. on Aug, 3, 2021 during the regular city council meeting.

Every ten years, local governments use new census data to redraw their district lines to reflect how local populations have changed. Assembly Bill 849 (2019) requires cities and counties to engage communities in the redistricting process by holding public hearings and/or workshops and doing public outreach, including to non-English-speaking communities.

Redistricting determines which neighborhoods and communities are grouped together into a district for purposes of electing a Councilmember.

The city council is seeking input in selecting the next district map for the city council and interested parties should plan to attend the Aug. 3 city council meeting in person or by calling in to give public comment. This is an opportunity for residents to share with the city council how they think district boundaries should be drawn to best represent the community.

Live broadcasting of the hearings will be available on the city’s YouTube channel. A recording will be made of each hearing and posted to the city’s elections webpage the following day.

To request an interpreter (other than Spanish) or an accommodation pursuant to the American Disabilities Act for public comment, contact the city clerk at least 72 hours prior to the public hearing at (805) 237-3960. A Spanish interpreter will be available at all city council redistricting public hearings.

Contact the City Clerk at cityclerk@prcity.com or (805) 237-3960 to find out more about how the process works or go to www.prcity.com/redistricting.