Paso Robles News|Wednesday, May 12, 2021
You are here: Home » Community » City receives grant for crosswalk upgrades at Appaloosa and Niblick

City receives grant for crosswalk upgrades at Appaloosa and Niblick 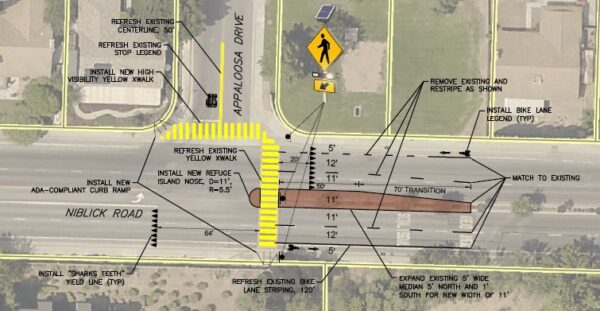 –The City of Paso Robles was awarded a Highway Safety Improvement Grant on March 31 for crosswalk upgrades at Appaloosa Drive and Niblick Road. The grant will pay for push-button flashing lighting, extension and widening of the median to create a pedestrian refuge island, and enhanced road striping. The project goal is to create a safer crossing for pedestrians by providing high visibility lighting, signage, and markings that will alert drivers to pedestrian presence. This crosswalk is used by many residents and students throughout the day. The crosswalk is heavily used in the afternoon by students in order to access the bus stop on the south side of Niblick Road.

“I am very pleased that this project was funded,” said City Engineer David Athey. “Speeding on Niblick Road is a problem as the corridor has a higher than average accident rate. These crosswalk upgrades will provide additional measures to alert the driving public that pedestrians are present.”

The Niblick Road Corridor plan includes other planned upgrades to the corridor. The planned upgrades include increasing lane widths in some sections, infill sidewalks, a Class I two-way bike path on the north side of the road, speed radar feedback signs, signal enhancements, and other upgrades. The overall goal of the Niblick Road Corridor Plan is to maximize vehicle throughput, reduce speeding and associated accidents, and increase pedestrian and bicycle usage.

The Niblick Road Corridor Plan can be found here: https://www.prcity.com/niblickroad.

“Safety enhancement is not limited to the Niblick Road corridor,” Athey said. The city is also working on a local roadway safety plan which identifies problematic areas throughout the city. Work on the city’s local roadway safety plan is currently wrapping up the public input process phase. The city recently solicited public input at a February council meeting, through press releases, and the city’s social media channels. The city received over 150 responses on problem areas around the city. “The public input has been helpful in confirming the problems that the accident data shows,” said Athey.

The plan will be going back to the city council at an upcoming meeting for review of the public input and to gather final input from the council. The final report is scheduled to be presented to the council for adoption in May.

The city still has to complete the grant award process and design before construction can begin in the latter part of 2021 or early 2022. For more information on the Appaloosa crosswalk, Niblick Road Corridor Plan, or Local Roadway Safety Plan, email David Athey at dathey@prcity.com or call (805)237-3860.