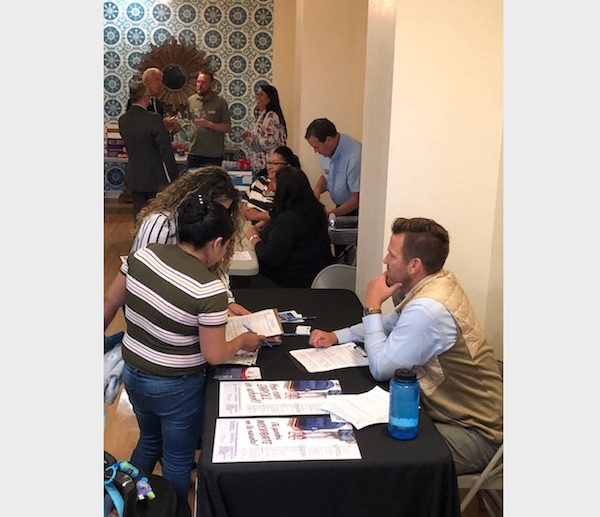 Dr. Joe Williams of PRJUSD speaks with some of the evicted tenants.

–About sixty people attended a meeting this week for residents of the Grand View Apartments who recently received eviction notices by their landlord. The meeting was held in the Paso Robles Housing Authority meeting room at 80 Cary Road, off South River Road. The Grand View apartments are located on Spring Street and Niblick Road, near the south entrance to Paso Robles.

Attorneys with SLO Legal Assistance filed a lawsuit against the Santa Barbara owners charging the living conditions were unhealthy and unsafe. The tenants complained of plumbing issues and vermin, including rats and bed bugs. The landlords asked contractors to calculate the cost of fixing leaky pipes and removing vermin from the property. They estimated the cost of repairs at $2.5 million dollars. The owners decided to vacate the property and sell it. They sent 60-90 day evicting notices to people occupying 47 units. According to Paso Robles City Manager Tom Frutchey, the owners are asking $11 million dollars for the property.

Wednesday evening, tenants facing eviction met with leaders from the City of Paso Robles, Self-Help Housing, Paso Robles School District and other agencies to try to find ways to resolve their housing crisis. Stephanie Barclay of SLO Legal Assistance says another meeting will be held to accommodate those tenants who are working nights at local wineries.

Barclay said, “The problem is the demand for housing greatly outweighs the supply. We’re trying to resolve it so that these people do not end up homeless during the holidays.”

Frutchey says the River Lodge Motel and the Paso Robles Boys School are not options. “We don’t own either property. The River Lodge is tied up in legal negotiation. The Boys School is owned by the State of California.”

Stephanie Barclay says anyone with information about available housing in the Paso Robles area is encouraged to contact her agency, the City of Paso Robles or the Salvation Army.