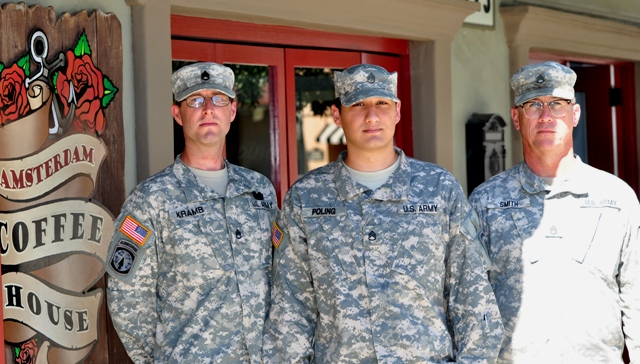 If you noticed soldiers walking the streets of downtown Paso Robles on Tuesday and Wednesday this week you weren’t alone. Civil Affairs soldiers from the United States Army Reserve were out and about talking to local business owners, community leaders and everyday citizens. No, it wasn’t an invasion – it was a small training exercise for the soldiers attending classes at nearby Fort Hunter-Liggett.

Civil Affairs soldiers are tasked by the Army to talk to civilians when they deploy overseas. These soldiers have the responsibility of being the voice of the local population to Army forces and vice versa. They are the Army’s primary tool in understanding the local people and helping to promote stability and growth wherever they are sent.

Of course Paso Robles doesn’t need the Army to help it grow. It’s doing that just fine on its own. The city does, however, offer a beautiful functioning and friendly community that is the perfect environment for these Civil Affairs soldiers to learn how to talk to people and conduct interviews. The 12 soldiers met with local leaders throughout the downtown area and spoke with emergency management personnel, clergy, shop owners, media outlets, local farmers and more. The group was able to take pictures, conduct interviews, have lunch and interact with the citizens on a personal level that few soldiers in the Army ever get to experience while in uniform.

Most of these soldiers have been deployed to Iraq, Afghanistan, Africa, South America and elsewhere multiple times. While deployed they used the skills learned in the classroom to help the people of those areas rebuild. Talking to community leaders and others in towns across the United States helps these soldiers to grow themselves and build the skills necessary to succeed in their missions overseas.

There is no doubt that talking with the citizens of Paso Robles will help these soldiers in the future. The Civil Affairs soldiers had a great time and found the City of Paso Robles both friendly and exciting and wish to thank everyone who interacted with them for their time and effort.