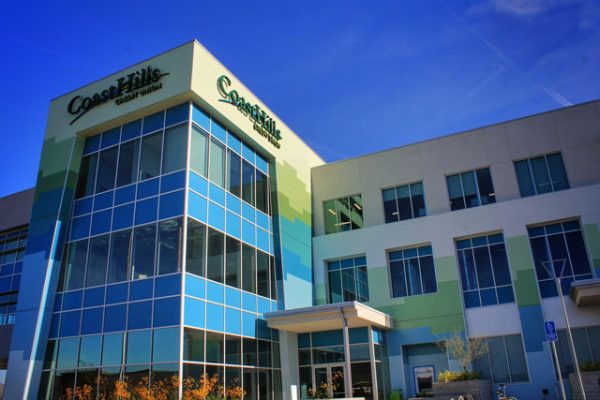 SANTA MARIA, Calif. — With a brand-new facility firmly planted along the Highway 101 corridor in Santa Maria, CoastHills Credit Union will host a three-day grand-opening celebration at its newly opened headquarters, as well as throughout its branches across the region. The credit union has a branch in Paso Robles at 1402 Spring Street.

The grand opening will kick off Wednesday, March 11, with a “Member Appreciation Day”, followed by a ribbon-cutting at its new Santa Maria headquarters Thursday, March 12, and a “Friday Fun Day” on March 13.

In all, more than $13,500 in cash prizes will be given away to CoastHills members and the general public.

The Thursday event will also mark the dedication of the facility’s commemorative wall honoring area military veterans, as well as a special charitable donation announcement.

“The opening of our new space in Santa Maria really is a signal of our continued investment in the Central Coast region,” president and CEO Paul Cook said. “We want to extend that a step further by giving back to the charitable organizations that serve our Central Coast communities.”

Credit union employees were asked to submit area nonprofits as potential candidates for a $5,000 donation from CoastHills, and March 12 will mark the announcement of which nonprofit receives the funds.

The credit union will also be giving thanks to the community by hosting additional events throughout the three-day period, including a “Pick-a-Pig” piggy-bank wall at its headquarters, where 144 raffle winners can select a piggy bank and take home its contents — ranging from $5 to $1,0001. More than $8,000 in cash prizes will be given away. The contest is open to anyone, but you must register at the new branch at 1075 East Betteravia Road between 4 and 5 p.m. on March 13 to participate.

Additionally, each of the credit union’s 11 branch locations will be holding a separate $500 sweepstakes giveaway for CoastHills members on Wednesday, March 11.

These headquarters celebrations will also include swag giveaways, refreshments, and free document shredding.

“The beauty of CoastHills is that we’re member-owned,” Cook said. “That means nothing is more important to us than our member-owners. At this pivotal moment in the CoastHills story, it feels like the perfect time to say thank you.”