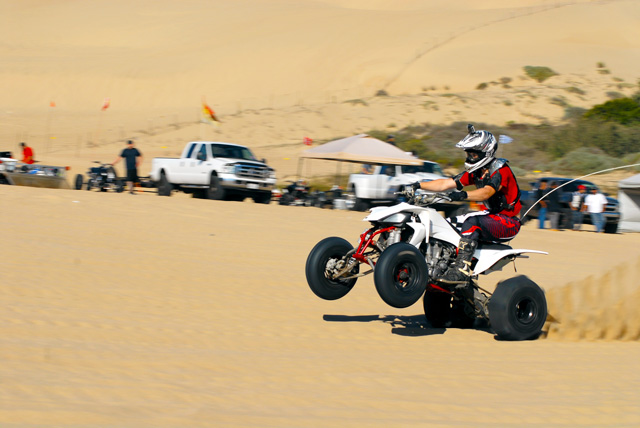 –California State Parks operates a nearly 5,000-acre State Park in and around the City of Grover Beach and Oceano in south San Luis Obispo County, typically referred to as Oceano Dunes, and it is the only State Park in California where vehicles (including off-highway vehicles, or OHVs) are allowed on the beach and dunes.

The California Coastal Commission retains the ability to make changes to Park operations through periodic review of its CDP that temporarily authorized uses and intensities of use at the Park in the 1980s, and found most recently in 2019 that driving at the Park has degraded dune habitats, harmed native species, caused air quality and public health issues, and made it difficult for the public to walk, swim and enjoy other non-vehicular activities at the beach and dunes. At that time, the Commission required State Parks to address all of these issues and more, including to evaluate phasing out OHV use altogether, and State Parks has now developed a draft plan in response (known as its public works plan, or PWP).

Commission staff has evaluated State Parks’ draft PWP and believes that it is not consistent with the Coastal Act and the City of Grover Beach and San Luis Obispo County Local Coastal Programs (LCPs), which are the standard of review for the PWP.

In particular, the PWP does not address the range of coastal resource impacts associated with the uses and intensities of use at the Park. Due, in part, to the concerns raised by the PWP, staff is recommending that the Commission amend the underlying CDP to address the coastal resource impacts caused by operation of Oceano Dunes and bring such operations into compliance with the Coastal Act and applicable LCPs.

This includes recommendations to eliminate OHV use over a 5-year transition period, provide low-cost vehicular access/camping on the beach between West Grand Avenue and Pier Avenue (with no vehicles south of that point), close the Pier Avenue entrance in Oceano, and make a series of changes to protect natural resources in the Park (including the dunes, Arroyo Grande Creek, Oso Flaco Lake, sensitive species protections, etc.). Importantly, this recommendation would not close the Park, and it would continue to remain open and available both for general public use (including activities associated with beach day use, ocean activities, equestrian use, biking, hiking, fishing, birdwatching, etc.), and for vehicular/camping use in its northern reach.

Commission staff believes that given the information that is available to the Commission today, these conditions are required for the uses allowed at the Park to be consistent with the Coastal Act and LCPs, as well as to bring finality to at least 40 years of debate and discussion on these issues. Although staff recognizes that this recommendation will require a significant shift in Park operations, it will also allow for a different Park experience that is itself attractive for coastal visitors and that can serve as a regional economic engine, particularly for families looking for unique lower cost recreational and outdoor opportunities.