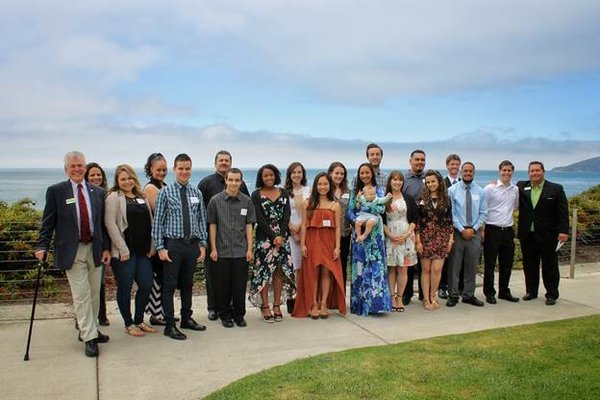 –CoastHills Credit Union recently awarded $45,000 in scholarships to local college students. The award grants were $2,500 each to two students from nine colleges within CoastHills’ field of membership, which ranges from Santa Cruz County in the north to Ventura County in the south.

Each student and their guests were also hosted at a special luncheon and awarded a nights stay at The Cliffs Resort in Pismo Beach. This was the first year that community college students received the awards and the first year scholarships were awarded to students in all five counties of the credit union’s field of membership, which includes Santa Cruz, Monterey, San Luis Obispo, Santa Barbara and Ventura counties. The awards were increased from $1,000 to $2,500 and to honor the class of 2016, CoastHills also pledged to donate $216 in each recipient’s name to a charity of his or her choice to help each fulfill the credit union’s mission to make a difference in neighbors’ lives.

Allan Hancock College student Victor De Alba, who graduated in May with dual degrees in liberal arts and social and behavioral sciences, said he was told his life wouldn’t amount to anything, and branded a “troublemaker,” just like his two incarcerated older brothers. He had only earned a 0.4 GPA starting out at Lompoc High. De Alba decided to change his path and prove everyone wrong about him. Earning a 3.55 GPA at Hancock, De Alba is the president of his campus honor society and has put in more than 2,000 hours of volunteer work to support at-risk youth and drug awareness.

“I was often told by school administrators that I wasn’t going to make it, I was going to end up like my brothers or some of my friends, on the streets for the rest of my life,” De Alba said. “It’s been my goal to one day reach the title Dr. Victor De Alba to prove wrong those people who didn’t believe in me.”

CoastHills President and CEO Jeff York said there’s no better investment our scholarship program could make than to support the hardworking and dedicated students found in the community college system right here at home. “Recognizing these students’ stories of triumph over adversity has greatly touched the lives of my entire family and all of us at CoastHills,” he said.

Supported by the CoastHills Community Foundation, the Gold Standard Scholarship program significantly expanded this year in both geographic scope and financial commitment.