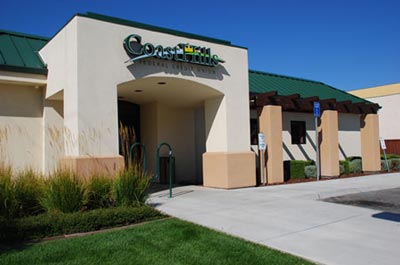 –The CoastHills Credit Union (CoastHills) Board of Directors announced Thursday that it has unanimously chosen Paul Cook to serve as the Credit Union’s President/CEO, effective August 20, 2018. Cook, who has served as CoastHills’ executive vice president and chief experience officer, replaces Interim CEO Dal Widick. There are 11 Coast Hills locations on the Central Coast, including one in Paso Robles and one in Atascadero.

Cook came to CoastHills as the SVP & Chief Information Officer in June of 2015. Since February of 2018, he has served as the EVP & Chief Experience Officer for the Credit Union and has played an integral role in shaping the Credit Union’s strategic direction.

In addition to CoastHills, Cook has more than 20 years of experience in the financial industry, including serving as SVP/Chief Information Officer at Heritage Oaks Bank; Chief Technology Officer at Los Alamos National Bank in Los Alamos, N.M.; and Vice President of IT at Pioneer Federal Credit Union in Idaho.

CoastHills utilized a national search firm to conduct the process, which initially generated more than 50 applicants. The field was eventually narrowed down to four finalists, including three external candidates and Cook.

“We were very encouraged by the caliber of candidates who showed such a strong desire to step into this role,” said Bill Anders, Chairman of the CoastHills Board of Directors. “Our decision to choose Paul was unanimous, and we are all confident he is the best person to take us forward. This Credit Union has a heritage of service to our members, local communities, and with Vandenberg Air Force Base. Under Paul’s leadership, we will continue our steadfast commitment to go above and beyond for our member-owners.”

The unanimous selection of Cook was made on Aug. 8, which was also the Credit Union’s 60th anniversary.

“My wife Theresa and I are excited about this next phase of our lives here on the Central Coast,” Cook said. “I am humbled and honored to serve the 67,000 member-owners that makeup CoastHills and to accomplish many more great things with the incredible people on the CoastHills team.”