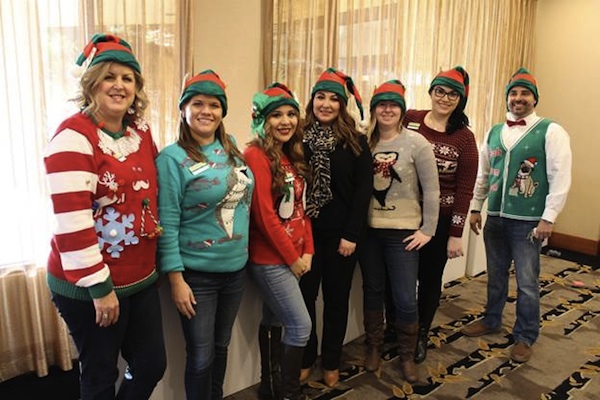 –At a staff meeting this past week that gathered all credit union employees from each of 11 branches from Paso Robles to Lompoc, the CoastHills Culture Advisory Team collected more than 220 new, unwrapped presents and gift cards for local underprivileged youth. The presents were delivered to Boys and Girls Club sites in Oceano, Guadalupe, Santa Maria and Lompoc.

It was the first time the credit union has attempted a gift drive of this magnitude, but the idea started within the consumer loans department at the corporate headquarters in Vandenberg Village. Last year, the employees in the credit union’s lending center teamed with a local agency to deliver gifts to foster children. That drive inspired CAT members to think bigger this year.

“We have such dedicated and giving co-workers, we knew it would be a terrific idea to expand the concept company-wide,” said Christina Tonoli of the credit union. “We couldn’t be happier with the turnout, and it’s heartwarming to know how many kids we made a difference for this holiday season.”

All gifts were purchased and donated directly by CoastHills employees. The drive encompassed all ages but also placed a special emphasis on teens, an age group that is typically underserved in holiday gift drives.

Many of the children served by the two sites overseen by the Boys and Girls Clubs of Santa Maria Valley — at Mary Buren Elementary in Guadalupe and on Railroad Ave. in Santa Maria — do not experience the typical Christmas. Some do not celebrate the holiday for socioeconomic reasons, said Executive Director Jemery L. Deming.

“We had two different parties, one for each site, and the kids really had no expectations of getting gifts,” Deming said, “but the fact that they walked away with a bag full of gifts and treats, that was priceless.

“This community is one of the most giving, charitable communities I’ve ever had the pleasure of living in, and CoastHills is the perfect example of that spirit of generosity and giving. It’s just a wonderful relationship that we cherish.”