Map of Morro Bay and estuary as it is now. (Photo from Our Coast Our Future).

– A group of people were gathered at a recent event and talk wandered to climate change and how it was affecting the habitats of the central coast. “The rise in sea level is going to be a real problem,” one man said, “It will probably wipe out places like Morro Bay.” But will it?

“It isn’t going to be like a bathtub filling up,” commented Lexie Bell, Executive Director of the Morro Bay National Estuary Program (MBNEP). “There are a lot of other components that come into play.” Bell was meeting with me as part of my 26-year involvement with the MBNEP Education and Outreach Committee. “So, how is it going to affect us,” I asked, “and is it happening now?

Map of Morro Bay and estuary with 16.4 sea level rise (Photo from Our Coast Our Future).

Turns out the signs of any sea level rise are not apparent to us as we view places like the Embarcadero and the salt marsh estuary in Morro Bay. The MBNEP has been studying this for years and a report on their research is included in their State of the Bay 2020 Annual Report.

During our discussion Bell introduced me to the model developed by the US Geological Survey called Coastal Storm Modeling System and showed me the website of Our Coast Our Future (www.ourcoastourfuture.org). The site has interesting models of coastal flooding and what could be expected with shoreline change due to a rise in sea level. These models are interactive and a visitor to the site can bring up a map of a location and then apply a variety of problems to that map showing what areas would be covered by water. One of the most extreme examples is a sea level rise of 16.8 feet included with a 100-year storm. For Morro Bay the salt marsh estuary disappears, and flooding is seen far up Chorro and Los Osos creeks. In this scenario the marina disappears, and the Natural History Museum is surrounded by water. The sandspit is reduced to a narrow band and much of the area in Baywood Park along the back bay is all under water. 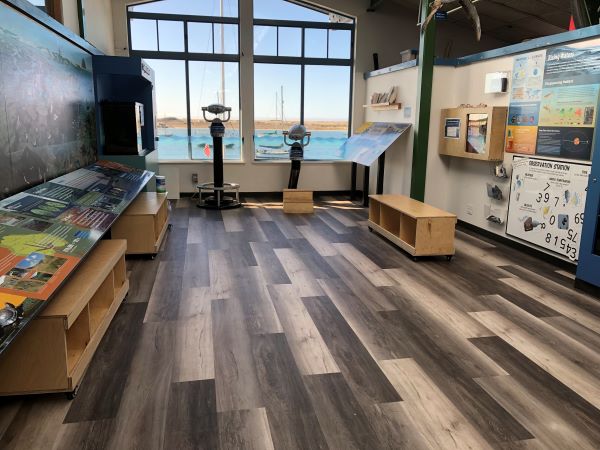 “It’s predicted that seas could rise three to 10 feet by 2100,” Bell explained and while that is a long way off for most of us to think about, slight changes in things like tidal flow, temperature of water, river discharge from storms, storm surge, and other seasonal effects are happening now and will continue to happen.

Do we see a change or an increase in the water level in the estuary? Not to the naked eye, but yes, a very subtle change. “We do see higher King tides,” Bell said, and water encroachment happens at that time along State Park Road at the Windy Cove section. King tides happen several times a year when the tides rise several feet more than they normally do. The next King Tide is due to occur on Dec. 4 and 5 when tides are expected to be nearly seven feet at the highest point. Other areas that see higher water levels at King tides are near what was once called the Twin Bridges section of South Bay Blvd. In this section sediment buildup is also a key factor that could have the area subject to flooding. “With a two meter sea level rise the salt marsh would be covered by the ocean,” Bell said. 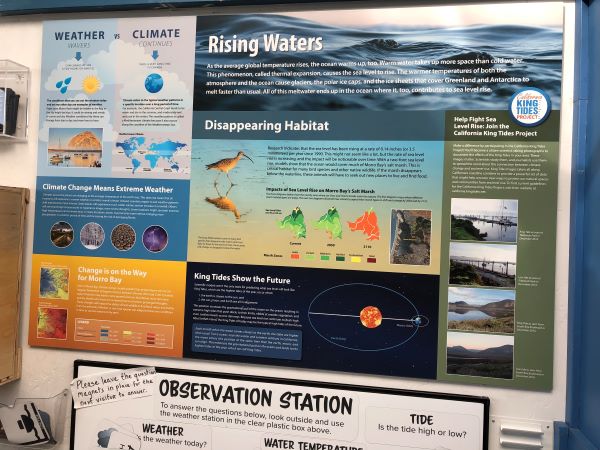 Environmental change is a fact and coupled with a worldwide pandemic it has not made the work of the MBNEP any easier. However, after some years seeing almost the complete disappearance of eelgrass in the bay, this important plant food for wildlife, especially Brant geese, is making a comeback. Has transplanting been successful in the bay or is there some other answer to this mystery? “We’ve never quite figured out why eelgrass declined,” Bell explained, “but water temperature and excess sediment might have contributed to it.” Could a modest sea level rise with a change in temperature help or continue to hinder eelgrass growth? That is the question.

There is much more to this story than can be gone into here however the MBNEP continues to do projects that improve water quality, restoration on creeks and in the watershed, works to eliminate invasive species like the Sacramento pikeminnow in streams, and monitoring of sensitive sites throughout the bay.

A visit to their creative and educational Nature Center at Marina Square gives you the opportunity to study the displays pertaining to sea level rise. In the meantime, they could use your support during this giving season. Your dollars will help to keep the bay clean and healthy for years to come. Go to www.mbnep.org to donate.