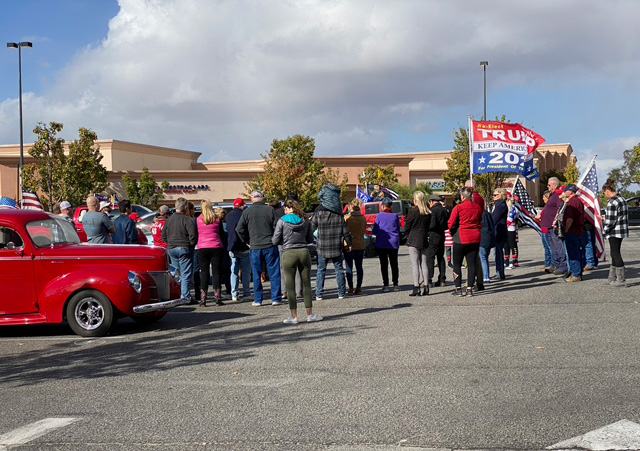 Trump supporters gather in prayer near Kohl’s in Paso Robles before a MAGA rally last fall.

Political commentators on the left, including most recently Washington Post’s Eugene Robinson and former CBS anchor Katie Couric, have warned America about the “cult of Trump,” whose members need to be “deprogrammed.”

On Fox News, former Governor of Arkansas Mike Huckabee countered that it’s the political left who are part of a cult. So-called “cult experts” in deprogramming have been called in to adjudicate, but as a religious studies professor, the current proclivity to pin the “cult” label on the other side represents a misguided introduction of religious language to politics and reveals more about the political environment than the religious one.

While the term “cult” is often employed in the media, most scholars of religion avoid it altogether because it has no specific definition. What is the difference between a cult and a religion? My glib answer is only 100 years and 100,000 followers.

You see, “cult” is merely a derogatory label typically placed on alternative religious movements that someone does not like. When new religious movements gain enough followers or last long enough, they graduate to being seen as a religion. For years, the Church of Jesus Christ of Latter-Day Saints, popularly known as the Mormons, were widely referred to as a cult in an attempt by other Protestants to disparage them; now, this opinion is thankfully jettisoned to the extreme fringes and members of the church like Mitt Romney can run for president with little direct bias against his religion.

Applying the “cult” label to political opposition is thus primarily a shallow rhetorical attempt to harness the negative connotations of the term in order to sully the opposition with a single swipe.

Religious studies scholars also note that no one self-consciously joins a cult. Rather, they join movements that they believe are good for them and the world. Some of these alternative movements became abusive and the result is usually a magazine expose and Netflix documentary, always with background music borrowed from horror films and grainy imagery designed to titillate the darkest recesses of our fears. But most alternative religious groups stay positive, small movements that have dedicated followers whose lives are at least modestly improved by joining.

While some may want to disparage the intentions of their political opposition by labeling them a cult, perhaps we should learn from religious studies and begin by recognizing the good intentions of most people, whether they associate with the political left or right.

Even when alternative religious movements become abusive, the members of these movements should not be seen as simple-minded sheeple who were “brainwashed” and now need deprogramming. While paranoia about brainwashing has a long history, the “brainwashing by a charismatic cult leader” defense was popularized by lawyers for Patty Hearst to justify their client’s actions while she was entangled in a political terrorist organization, and has since taken hold in popular imagination.

The reality is that while humans are surprisingly ideologically flexible, there is usually a logic to the group’s worldview, given the premises they accept and the set of facts that the group to focus upon. Blaming “brainwashing” provides primarily a convenient excuse by accusers to not seek genuine understanding or to stand in the shoes of another.

So, I don’t think it is generally productive to compare Trump’s following to a cult or to apply the same critique to the far left. We should retire the cult label for religion and politics.

However, perhaps there is one way that the understanding of alternative religious movements may be helpful: Studies show that what draws people to these movements is less a genuine search for truth than a deep desire for belonging — to be a part of a movement that is bigger than them. Without ignoring some of the policy positions that might attract some support, the rise and resilience of the Trump movement and the intense tribalism sometimes on display on the Left suggests to me that there are significant groups in America who feel disconnected and alienated. For a certain group of Americans, Trump gave them something to believe in and a community to call their own. The MAGA hats, bumper stickers, and flags became the equivalent of crosses for Christians or Star of Davids for Jews: signs of fellow believers amidst a sea of uncertainty. The left also has their totems, coded for their fellow devotees.

Such a deep desire for belonging is no surprise with the declining participation in religious institutions, civic groups, block parties, sports leagues and social clubs that we have witnessed over the last half century. Instead of crying “cult” and advocating deprogramming of the other, perhaps our energies would be better spent developing meaningful opportunities to find community and come together beyond politics. That would be a “cult” that I hope we all can believe in.