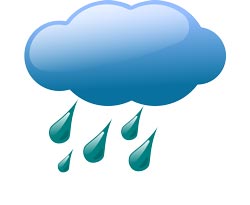 Rain is finally arriving in Paso Robles today, according to local forecasts. Just in time for Halloween trick-or-treaters, the rain is expected to start falling late this afternoon and continue through the weekend. About .6-inches of rainfall is expected today.

Temperatures are expected to fall today with a high of 68 degrees.

There was an unusually monsoon sprinkling in July that left .03-inches, but the last significant rainfall was in April and May.

A fast moving cold front will spread rain along the central coast this afternoon, then spread into Ventura and Los Angeles counties this evening. Showers will persist into Saturday morning across the region with a chance of residual showers mainly on north facing mountain slopes from Saturday afternoon through early Sunday morning.

Most areas are expected to see 3 to 4 hours of steady rain with the initial front, then turn showery as the front moves east. There will also be a slight chance of thunderstorms over San Luis Obispo and Santa Barbara counties tonight as colder air moves in aloft. Any thunderstorms would have the potential to bring brief heavy rain and small hail.

Rainfall amounts from this afternoon through Saturday are generally expected to range between three quarters of an inch to one and one half inches along the central coast, with higher amounts across northwestern San Luis Obispo County. Otherwise rainfall amounts of one quarter to three quarters of an inch can be expected for most areas, with local amounts up to one inch in the San Gabriel Mountains.

Snow levels will start out above 7500 feet through this afternoon then fall to 6000 to 6500 feet by Saturday morning. Most of the steady precipitation should be over before the snow levels lower significantly.