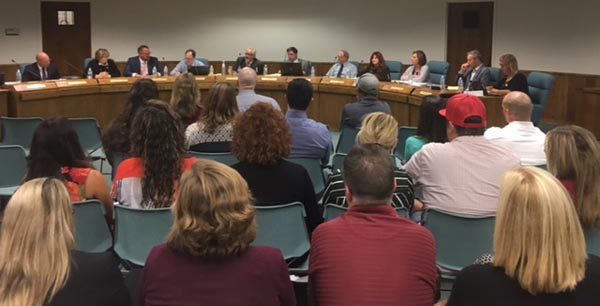 Over a dozen parents, teachers and community members addressed the board Tuesday night

–The Paso Robles School Board meeting attracted a full house Tuesday night. Trustee Chris Bausch called it the “greatest turnout in years.” The issue which was the controversy over the suspension of Head Football Coach Rich Schimke.

The board allowed about 14 parents, teachers and community members to address the board. Most told the trustees that they had known Rich Schimke for decades as a teacher, a coach and a man- and they supported him. One teacher said that the administration “should not throw this man away.” She said that Superintendent Chris Williams told her long before this present conflict that he did not want Schimke to be head football coach. Another teacher described Schimke as very professional. She said to slander Schimike’s character was unacceptable. A third teacher said he’s seen the pain and frustration on the faces of the football players. He says he feels badly for the boys and for Coach Rich Schimke, with whom he’s worked for years. A parent said he felt that Coach Schimke should immediately be reinstated as head coach.

A few speakers backed the administration. Matt Montero said Superintendent Chris Williams has been more supportive of the wrestling program than any administration in the last seven years. Chris Montero agreed with him. He said he’s coached wrestling for 20 years, and that the current school board is the best he’s seen.

After about fourteen people addressed the board, the trustees spoke. Each supported Superintendent Chris Williams. Trustee Chris Bausch, however, said Schimke deserves a fair and impartial hearing. David Lambert said he resented the threatening calls at 11:00 on a Sunday night. He said harassing phone calls will not make him change his mind. Field Gibson said the district’s “Code of Conduct” goes beyond criminal behavior. He said the board hired Chris Williams to make it a better school district.

Finally, Williams addressed those in attendance. He said that his job is to serve the kids. He said he didn’t move from the valley to be part of a mediocre district. He said he will continue to recruit the best employees for the district.

As for Schimke’s future, that remains to be determined by Superintendent Chris Williams. Schimke is now back in the classroom teaching math, but it does not appear he will return to coach football at Paso Robles High School. Schimke clearly has other options if he wants to continue to coach. On the CIF “Coaches Needed” website the Atascadero School District is searching for an assistant coach who can teach math.

Last night, about a dozen teachers, parents and one student made it clear they appreciate Coach Rich Schimke and resent the way he was treated by the administration. Regardless, the trustees say they support Superintendent Chris Williams and await his final determination.