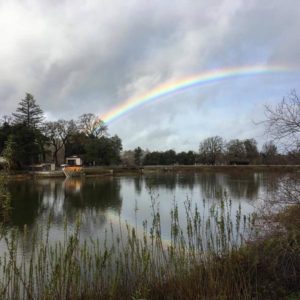 —Community members discussed the rapid growth of algae in the lake at the Atascadero city council meeting held June 26. Residents raised examples of its negative effects and proposed solutions to the city.

Different solutions proposed during the community forum included mechanical harvesting, chemicals, and utilizing volunteer forces comprised of Cal Poly, the California Men’s Colony prisoners and the community. Some members who spoke offered their services in the biology field and labor to help rid the lake of algae.

“We all know that the lake is the jewel of Atascadero, we know there’s been an increase in park use…it is an important part of the city of Atascadero,” said Nancy Hair, the secretary of Friends of Atascadero Lake, at the meeting. Hair called for the city council to direct a portion of the funds from the Parkland Facilities Fee Fund to address the algae issue.

Mayor O’Malley acknowledged that the city council supports the improvement of the lake and surrounding areas. The city engineer also discussed a future management plan for next year and where funds may be drawn from for the algae issue, such as the Parks Maintenance Fund or Parkland Facilities Fee Fund, depending on the city’s discretion.