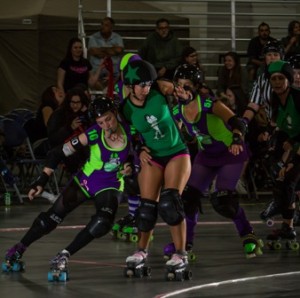 Corona SlamHer is jamming for the A-town Asylum team versus Rita Bandita, who is blocking for her team, the Broad St. Brawlers, in a recent Central Coast Roller Derby home game. Photo by Coll Sinclaire.

Excitement, energy and tons of fun – that’s what the gals of Central Coast Roller Derby are all about. And don’t forget being competitive – these skaters love to compete and put on a show for their hometown crowd.

Founded in 2006 by two local women — Heather Coss (Rotten Peaches) and Carey Jones (Senorita Cheeba) — CCRD is stronger than ever as the skaters train for a full season of games in 2014. The women make up three home teams – Paso Aggressive, A-town Asylum and Broad St. Brawlers – as well as a competitive travel team, SK805, which is certified by the Women’s Flat Track Derby Association (WFTDA).

“The travel team members put in a few more practice hours than the home teams,” said Marissa Perona (Corona SlamHer), chairperson for the league’s training committee. “We also travel and not all of the skaters from home teams can commit to that.”

According to Perona, also a skater for A-Town Asylum and the SK805 co-captain, all travel team members belong to a home team as well. Currently, there are 10-12 skaters on each home team; ideally, the league would like the teams to consist of 14-16. Although they compete against each other in home games, the women are all friends who support one another and enjoy the sport with the same mission: to meet like-minded women and give back to their community.

So just what is it about the sport that attracts women to become involved with roller derby?

“I think it’s the culture of togetherness,” said Perona. “Everybody is very accepting of one another – it doesn’t matter who you are or what you like – we all stick together. Roller derby is very family-oriented and we are part of a big family.”

On the other side of that coin, said Perona, is the fact that most of these skaters tend to be very aggressive women. With performance names such as Blaque N’DeckHer, Ivanya Skulz CassWhoopin’ and Fearless BleedHer, there’s no doubt these women can hold their own out on the rink.

“We are loud, exciting, adventurous women who want to get that certain kind of excess energy out,” said Perona. “I’m a very competitive person myself and roller derby definitely feeds 90 percent of my need to compete.”

But don’t let their skating names fool you – these women mean business. Whether working as an accountant, teacher, Special Education assistant, probation officer or alongside high-risk youth, the skaters of CCRD are also career women.

“The jobs we do when we are not skating runs] the full gamut and most of the women have children as well,” said Perona. “Roller derby allows everyone to just come out and be themselves and be among other women without the fear of being judged.” 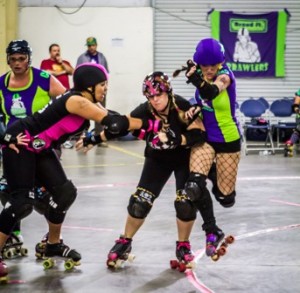 As one might imagine, these skaters get quite a workout. That’s a big part of the appeal for many of the women – a side benefit, so to speak. A typical practice, according to Perona, consists of warm-ups, monthly goals such as hitting, about 60 minutes of drills, 30 minutes of off-skate endurance and strength training followed by a stretching and cool-down period. The travel team athletes practice four days weekly for a total of about 11 hours. Home team skaters practice an average of six hours weekly, including league scrimmages on Sundays. In order to play in games, skaters must maintain a 70 percent attendance record.

“This sport is a great way to get in shape and to be healthy for yourself and for your family,” said Perona. “Roller derby gives an amazing feeling of friendship and wonderful relationships are built. Being part of it really helps to improve one’s self-confidence. It’s a feeling of ‘if I can do roller derby. I can do anything.’”

With no permanent home rink and practice locations hard to come by these days, the skaters have been known to practice at churches, school gymnasiums, parking lots and basketball courts throughout SLO County. This year, they have been given the opportunity to practice at Cuesta College and will have also access to the school track for work outs. Most of the games for the travel team are in California, although they have also competed recently in Colorado and Las Vegas.Local games are held at the Paso Robles Event Center usually every other month, with a break during the time of the Midstate Fair.

Perona described the basics of a roller derby game, which consists of two 30-minute halves. Two teams face off, with five skaters from each team out on the track at one time. The “jammer” (basically, her body is the ball) earns points for her team every time she passes a skater from the opposing team. The pivot skates in the front of the pack and controls the speed. The goal of the three blockers is to make sure the opposing jammer doesn’t get by and also to help their own jammer move past the opposing team’s blockers.

“The crowd really gets into it – there’s a lot of energy, fun, excitement and entertainment, said Perona. “We encourage the families to get out, be together and enjoy athleticism at its finest. We keep it family-friendly and we make sure the kids have a lot of activities to keep them busy.”

The crowd gets in on the giving back aspect of the CCRD as well. At every home game, a raffle is held for a designated nonprofit organization. Those that have benefited in the past include the Family Care Network, the SLO Women’s Shelter, the SARP Center and the SLO Food Bank. Throughout the year, the skaters volunteer at a variety of events such as the SLO County Toy Run, the Morro Bay Harbor Festival, the annual Madonna Inn fashion show and ringing bells for the Salvation Army.

“We care so much about our community,” said Perona. “We want to be great role models for women and for girls.” 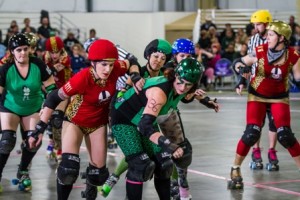 The A-town Asylum skaters (in green) face off against the Paso Aggressive (in red). A-town will attempt to defend their championship title in the first game of the 2014 season on Feb. 1 at the Paso Robles Event Center. Photo by Coll Sinclaire.

New this year is a Junior Derby class for girls ages 12-17; the first nine girls have already started training for the upcoming season. Recruitment meetings for adult women (18 & above for home teams, 21 & above for travel team) take place every quarter, followed by “Fresh Meat” classes for the newest team members.

The first home game of 2014 will be held on Saturday, Feb. 1 at the Paso Robles Event Center. Defending champion A-town Asylum will face off against Paso Aggressive followed by the Broad St. Brawlers as they take on a visiting team.

“The first game of the new season is always a bit more exciting. This year it will be a good rivalry as Paso and A-town go head-to-head,” said Perona.