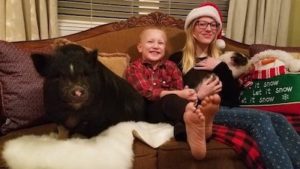 —Two concerned citizens expressed their opinions about the K&M Mini Pot Belly Pig Rescue organization located in Atascadero at the city council meeting held Jan. 9. The rescue organization, started by the Elder family, operates on half an acre of property with 11 pigs, while city ordinances require at least an acre of land with a maximum of four pigs.

No action was taken during the meeting, as the community forum portion is only to hear concerns addressed by the public. The city manager released information to the city council that the city is working with the property owners on reaching compliance with the current codes and ordinances.

The Elder’s will address the city council on Jan. 23, to urge Atascadero to officially recognize mini pot bellied pigs as pets, and not livestock. They also have a petition with over 2,000 signatures, as of Jan. 15.