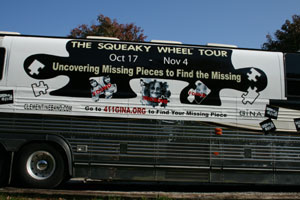 The Squeaky Wheel Tour is an annual concert series created by the Gina for Missing Persons Foundation, which raises awareness for the staggering number of people who vanish every year. The tour has several key concerts, including Facebook Live events and a webcast.

On Oct. 25 at 7 p.m., there will be a special concert in Templeton at the Central Coast Center for Spiritual Living in Templeton, located at 689 Crocker Street. Performers will be Gary Lynn Floyd and Jami Lua. They will be highlighting missing people Laurence Brannum, Kristin Smart, and Steven York. There is a suggested $20 donation.

The Gina Foundation and subsequently the Squeaky Wheel Tour was created in honor of Gina Bos. Gina mysteriously disappeared from Lincoln, Nebraska 19 years ago on October 17, 2000, after a performance. She has not been seen since. Her sister, Jannel Rap realized during her search that so many families were facing the same hurdles – their loved ones simply vanished with little or no compelling story to gain the much-needed interest of the media, and felt that she had to do something to change that. In 2001, she launched Gina Concerts which became the Squeaky Wheel Tour in 2006. Partnering with entertainers attracts audiences and media, and the result is that more people get found.

During the events, performers spotlight specific local missing persons, giving details of the events leading up to the disappearance. Attendees are asked to take a picture of the flyers of the missing to share on social media. A more extensive list of those waiting to be found in your area is at www.411GINA.org.