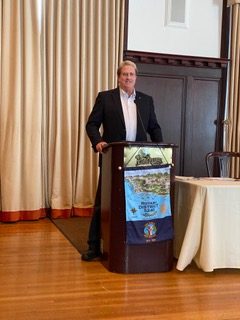 Caldwell is a founder of the Coalition of Labor, Agriculture, and Business (COLAB). The group reports 1,000 members in Santa Barbara County. Caldwell helped to start similar organizations in Imperial, Ventura, and San Luis Obispo counties. He is a graduate of UC San Diego and has been a resident of Lompoc since he was 10 years old. He has been married for 32 years and has 7 children. He also hosts a radio program that is heard in Santa Barbara and San Luis Obispo counties.

Caldwell, a Rotarian himself, told the club, “We now live in a ‘post-truth’ society where millennials believe ‘truth is what I feel it is’,” the club’s bulletin reports.

Caldwell sees this bending of truth as a major threat to our democracy citing Ronald Reagan’s words, “Freedom is never more than one generation away from extinction,” the report says.

Caldwell urges a call to action to teach children the importance of freedom and demonstrate why socialism is not the answer to our problems. He said he believes that millennials concern over income disparity is leading them to embrace socialism over capitalism. He sees this as one of the greatest threats facing our country today, the report says.

Caldwell’s presentation was about the Rotary Club’s Four-Way Test:

The Four-Way Test is a test used by Rotarians world-wide as a moral code for personal and business relationships. The test can be applied to almost any aspect of life.

Caldwell shared that his father was a Batton Death March survivor and taught him the value of hard work. “The freedom and democratic form of government his father fought for continue to provide the right path forward to prosperity and a better quality of life for all citizens.”

His opponent was offered the opportunity to participate, but chose not to, the report says. Though Caldwell was not campaigning at the meeting, his political priorities listed on his website include: