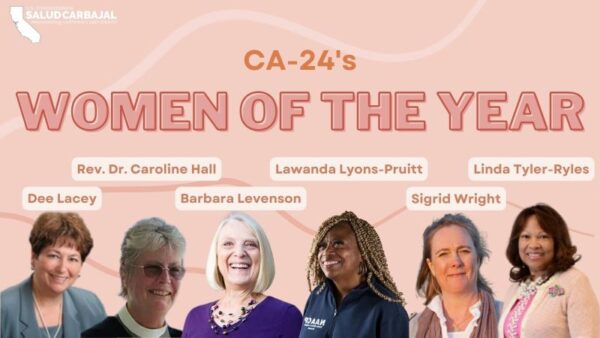 The award honors exceptional women across the 24th Congressional District who have left a positive impact on their communities. Winners span a variety of backgrounds and professions and represent the thousands of women working tirelessly to improve the quality of life on the Central Coast.

“The recipients of this year’s Women of the Year Award are all doing outstanding work to make the Central Coast an even better place to live, often without the recognition or compensation they deserve,” Congressman Carbajal said. “I am honored to recognize these remarkable, trailblazing women for their indelible contributions to our community.”

Carbajal will recognize the winners by entering a special written tribute for each woman into the official Congressional Record, preserving their stories and their impact on the community. An award ceremony will be held at a later date and each honoree will also receive a special congressional pin.

The biographies for this year’s honorees can be found here and below:

Rev. Dr. Caroline “Caro” Hall is an advocate for the homeless, the LGBTQ+ community, the environment, social justice, children, and our furry and feathered friends. She believes that being “part of the solution is required for all of us to make our community, country, and world a better place for everyone.” Hall was a founding director of Court Appointed Special Advocates (CASA) for SLO, founding organizer of Los Osos Cares, founding member of Central Coast Clergy and Laity for Justice, member of People of Faith for Justice, former member of SLO County Homeless Service Oversight Council, and current member of Los Osos Advisory Councils Unhoused Residents committee. She organizes the Los Osos winter warming center and still finds time to volunteer with the National Estuary Program, Sierra Club, and ECOSLO.

Dee Lacey is a longtime Paso Robles cattle rancher, dedicated to North County causes and cattle ranching heritage. Her lifetime of service has supported education on the Paso Robles School Board for 20 years and she is a member of the Cuesta College Board of Trustees. She has represented the cattle ranching community as a member of the California Mid-state Fair Board of Directors, the SLO County Farm Bureau Board of directors, the Cattlemen’s Association, and the Cattlewomen’s Association, of which she was president, has been honored as both SLO County Cattleman of the Year and SLO County Cattlewoman of the year. Lacey’s commitment to the community at large has contributed to founding the Paso Robles Library Foundation as well as the Paso Children’s Museum and membership in the SLO County Community Foundation, the Cuesta College Foundation, CAPSLO, and Studios on the Park. She has previously been recognized as a Paso Robles Citizen of the Year, Cuesta College Woman of Distinction, and the 33rd Assembly District Woman of the Year.

During her 27-year career at Atascadero State Hospital, Barbara Levenson spent her time off working at Atascadero’s Wellness Kitchen and as a member of the Flying Samaritans, providing free medical services around the world. She was recognized as an “unsung hero” by the SLO Tribune for her quiet dedication. Now she devotes her retirement to a variety of local causes. She is the chair of the SLO County Behavioral Health Board, a scholarship application reviewer for the Community Foundation of San Luis Obispo, a member of Central Coast Friendship Bridge empowering Guatemalan women, an Arroyo Grande Library volunteer, SLO NAACP member, and member of the SLO County Diversity Coalition to a variety of causes.

Lawanda Lyons-Pruitt retired from the Public Defender’s office and a career in advocacy and now serves as president of the NAACP of Santa Maria and Lompoc. As NAACP president, she keeps the public informed, sending out almost daily information about events and opportunities to participate in their community. She was activated to a new calling as a result of COVID, advocating for vaccines, especially among communities of color. Lyons-Pruitt is the organizer of Black History events throughout the Santa Maria-Lompoc communities and serves as the record-keeper of family stories of so many important Black families in our county, assuring they are properly recognized during every Black History Month celebration. Lyons-Pruitt’s energy and leadership encourage community involvement.

Linda Tyler-Ryles is a retired Santa Barbara Research Center/ Raytheon Business Manager who was previously recognized as a Girl Scouts “Woman of Distinction” by Raytheon. Tyler-Ryles is a former President and Recording Secretary of Endowment for Youth [EYC], a 30+ year member and Treasurer of George Washington Carver Scholarship Club, Santa Ynez Valley Woman’s club, the Santa Maria NAACP, and an Advisory Board member of Santa Barbara’s Martin Luther King Jr. Committee, recruiting students to participate in the Poetry and Essay Contest. A literacy advocate, Tyler-Ryles assisted elementary school readers in the Buellton Library “Tail Waggers” program as well as adults learning English in the library’s Adult Literacy Program. She is a member of Alpha Kappa Alpha sorority and advises undergraduate members. Tyler-Ryles is also an active member of her church volunteering in the nursery, a church usher, and Hospitality Committee member.

Sigrid Wright is a passionate leader in environmental and climate change advocacy on the Central Coast. She is the CEO of the Community Environmental Council, co-founded the Central Coast Climate Justice Network as well as the Central Coast Climate Collaborative, is the co-author or editor of more than a dozen policy documents, including the Santa Barbara County Regional Energy Blueprint, and has led the annual Earth Day Festival production team for more than 15 years. Wright’s dedication to advancing social, economic, and environmental justice extends to the advisory board of the Food Action Network, Leading from Within, and the Santa Barbara Foundation’s Collaboration for Social Impact.