Paso Robles News|Wednesday, June 23, 2021
You are here: Home » Region » Containment for some California fires increases while others still rage

Containment for some California fires increases while others still rage 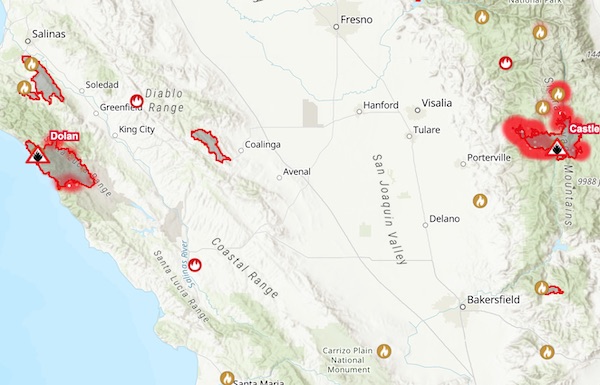 –Many fires continue to burn in California and the western US, although weather conditions have improved in many areas and containment lines have increased for some of the blazes. Some evacuation orders have been reduced since the extremely high temperatures and high winds of last week have begun to subside.

The fire closest to SLO County and the one still impacting local air quality is the Dolan Fire burning in Big Sur. The Dolan Fire is now over 117, 000 acres and is now 40-percent contained. Since the beginning of the fire, four structures have been damaged and 14 residences destroyed, according to the US Forest Service.

Two of the three firefighters hospitalized after a burn-over on Sept. 8 were released on the next day. The third is in stable condition. On the inland portion of the fire shading from upper-level smoke continues to moderate fire behavior. On the coastal side of the fire, the persistent marine layer has minimized fire behavior. An accident investigation is currently being conducted. For more on this fire, click here.

The Creek Fire, one of the multiple fires burning near Sequoia National Park and Shaver Lake, East of Fresno, is just 10-percent contained with hot weather and winds still creating high fire activity. Smoke is expected to settle into lower elevations in the central valley “with little to no recovery.” For more information about this fire, click here.

Across the state, over 16,750 firefighters continue working to gain containment on the 29 major wildfires. Firefighters responded to 36 new wildfires just yesterday, and all were contained quickly. Since the beginning of the year, wildfires have burned over 3.3 million acres in California, which is larger than the State of Connecticut. Since Aug. 15, when California’s fire activity elevated, there have been 22 fatalities and over 4,100 structures destroyed.

A Fire Weather Watch is in effect Monday over the Northern Sierra, potentially impacting the North Complex with gusty winds. A Red Flag Warning is also in effect this afternoon through this evening due to gusty winds and low humidity for much of Northeastern California.

Click here to view the daily fire report for Sept. 13.