Fitness Evolution CEO Sanjiv Chopra smiles as the Atascadero City Council approves the Conditional Use Permit that will allow him to move forward in opening his gym, Fitness Evolution. Photo by Paula McCambridge

After much debate, Fitness Evolution gym approved by city council

Though a local gym owner had brought in an attorney to battle against him, Fitness Evolution CEO Sanjiv Chopra was granted permission to open a new gym in a 4-1 Atascadero City Council vote Tuesday, with Councilwoman Roberta Fonzi dissenting.

“I was hopeful,” Chopra said. “It was exciting to hear the council discuss Fitness Evolution and vote as they did; I respect that process.”

Chopra said the 31,000-square-foot gym, located at the former Spencer’s Market at the south end of town, is in the permitting process now and that he hopes to break ground by the end of September and to be open by the end of the year.

But it was not an easy road getting his conditional user permit to operate. It was perviously approved unanimously by the Atascadero Planning Commission in April. That planning commission decision was appealed by Champions Health and Racquet Club owner Hank Minardo two weeks ago.

“I hear a lot of mudslinging here, but we want to be a part of this community, not apart from it — that’s in our mission statement,” Chopra said during the city council meeting.

The bulk of criticism of the project came from Give Fitness co-owner Josh Donovan and Minardo who joined together in an effort to halt Fitness Evolution. Their argument was built around a number of issues including what they said was a lack of parking and that zoning at the site is commercial retail and not fit for a gym in that location.

The existing gyms in Atascadero — Kennedy Club Fitness, Give Fitness and Champions — are also zoned commercial retail and required conditional use permits to open their businesses. Parking on the planned site exceeds that required by the city municipal code.

A number of city residents spoke during the public-comment period expressing concern that a retail business would be better in Atascadero since a recreation facility would not contribute tax money to the city. Fonzi agreed and said she would rather wait for a retail tenant for that space.

City staff said the decision to make was not a choice between a grocery store and a gym but between a gym and nothing, since the space has been vacant since August 2013 when the Spencer’s Market closed.

“I think you could debate all day concerning whether a gym is good or bad; what’s good about it is that it brings people,” said Councilman Bob Kelley. “This gentleman is willing to come in and revitalize [that space].” 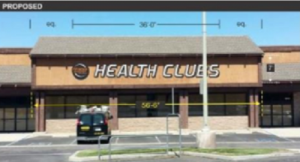 Architect’s rendering of the proposed Fitness Evolution in Atascadero

Mayor Pro Tem Heather Moreno said, “While we all have our personal opinions about what we’d like to see there or not … we want to be careful about what we say to business, who can come and who can’t.”

The fitness center, as proposed, will include classrooms, childcare, locker rooms, a massage center, circuit training area and basketball court.