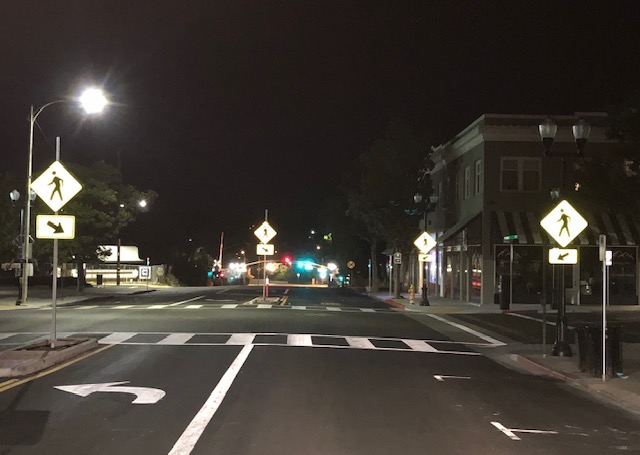 The poles are back in the center of 13th Street, and the lights are operating to make the crosswalks safer for pedestrians at Pine and Park Streets.

–At the outset of Tuesday night’s Paso Robles City Council meeting Mayor Steve Martin proclaimed this Constitution week in celebration of the 237th anniversary of the US Constitution. Most of the council meeting that followed, however, dealt with public works.

Ditas Esperanza talked about capital projects, including the roadwork on Spring Street. She says that after the work on the sewer and water lines are completed between 24th and 36th Street, the company will put a permanent seal on the roadwork. Next summer, the city will resurface that stretch of Spring Street.

She said the slurry seal on Creston Road from Niblick to Scott Street is complete, and soon the permanent striping will be done. She said the poles are back in the center of 13th Street, and the lights are operating to make the crosswalks safer for pedestrians at Pine and Park Streets. She says new poles were installed in the center of the median. They are breakaway poles, so that if a vehicle strikes the pole, they unscrew at the bottom, so they’re easier to replace. In recent weeks, several of the poles were struck by vehicles and bent. She says being further from the nose of the median will prevent that from occurring in the future.

Police Commander Caleb Davis reported that the new parking program is working well. He says that in the first two weeks about 3200 people used the app and 8800 used the pay stations. He says 66-percent of the people parked for fewer than two hours, so they did not pay anything to park downtown. He says the program has freed up parking spaces in the downtown area, which was the intent of the program. He says the employee permit program has 118 parking spaces in downtown, but they’re working to improve the train station parking lot to increase utilization there.

Councilmen John Hamon and Fred Strong raised questions about how people can utilize the parking kiosks for a short time and then return later in the day to use them a second time. Commander Davis said he would consult with the software company to see if that is possible. 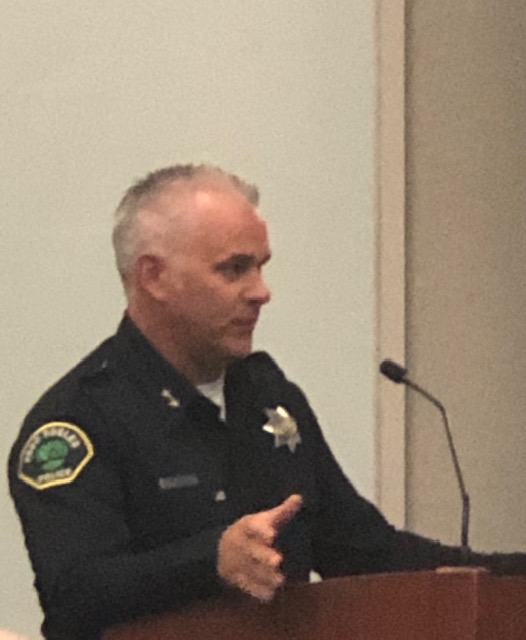 Police Commander Caleb Davis reported that the new parking program is working well. He says that in the first two weeks about 3200 people used the app and 8800 used the pay stations. He says 66-percent of the people parked for fewer than two hours, so they did not pay anything to park downtown.

Highlights from the City Council meeting as submitted by the City of Paso Robles are as follows:

Heard about Rideshare Week. National Walk to School Day is Oct. 2, with all Paso Robles schools and Councilmember Garcia participating. October 7-11 is Rideshare week. Residents can take a pledge regarding their planned participation and be eligible to win prizes at supercommuter.org. There are a number of public events happening during Rideshare Week. SLO Transit will be free every day that week.

Received an Update on Downtown Parking. The Downtown Parking program launched in early August. Since its launch, roughly 12,000 transactions have been made using the app and kiosks. Roughly two-thirds of those uses have been for people parking for two hours or less at no charge. The Chamber of Commerce reported that of the 114 survey responses they have received to date, 62-percent either like or love the Downtown Parking Program.

Received a Capital Projects Update. Work on Spring St. between 24th and 36th Street continues; full re-paving will be completed next summer. Water and sewer work within Dry Creek Road is largely complete; sewer laterals will be installed in a few weeks. Next summer full width resurfacing of Dry Creek Rd from Airport Rd. to the Estrella Warbirds Museum will be completed. The replacement of the main west water tank at 21st Street is underway. The old tank has been removed and construction of the new tank is ongoing. The airport terminal patio cover is almost complete. Parking lot repairs at 13th and Spring St. are underway; demolition is complete.

Received an update on the Tertiary Wastewater Treatment Facilities. Tertiary treatment is the third and final phase of the city’s wastewater treatment process. The facilities and equipment necessary for tertiary treatment have been completed, adding new facilities to the wastewater treatment plant. The tertiary treatment process takes the water that receives secondary treatment, runs it through a cloth filtration process to remove any residual particulates, and then runs the water through ultraviolet light filtration process to destroy any pathogens. The slope of the site was utilized for energy efficiency, taking advantage of gravity in moving the wastewater through its treatment phases. The project also repurposed some equipment and facilities, saving roughly $750,000. This fulfills the first part of the City’s Recycled Water Master Plan and will allow the city to utilize this tertiary treated water for irrigation of landscaping and agriculture. Byproducts of the process are being turned into commercial fertilizer and marketed to offset the cost of building the facility, which cost roughly $14.4 million. Costs were offset by a $4 million-dollar grant and a low-interest loan form the state.

Rescheduled the Oct. 15 Council Meeting to Oct. 29. Four of the five councilmembers will be traveling on Oct. 15, 2019 to attend the 2019 Annual League of California Cites Conference in Long Beach, and staff does not anticipate having a quorum of Councilmembers present for the regularly scheduled meeting. It is being postponed to Oct. 29 and will be canceled if there is not sufficient business to warrant the meeting prior to the regularly scheduled Nov. 5 meeting.

Approved an Agreement with A-Town AV, Inc. to Replace Council Chamber Equipment. Council approved a purchase agreement for approximately $121,000 to update Audio-Visual equipment in the Council Chambers. This will allow the city to stream meetings directly on the city’s website, provide timekeeping lights for public speakers, and update projectors to provide a better image quality, reduce maintenance costs, and reduce energy use.

Approved Service Agreements with the Chamber of Commerce. Council approved annual service agreements for FY 2019-20 to contract with the Paso Robles Chamber of Commerce to run the Visitor Center at an annual cost of $75,000 and to perform economic development work on behalf of the city at a cost of $185,000.

Accepted an Office of Traffic Safety (OTS) State Grant. Council accepted the State of California’s OTS grant in the amount of $30,000 for FY 2019-20 to fund overtime expenses for traffic enforcement. This grant does not require city matching funds, and will be used to fund increased DUI, bicycle, pedestrian, seatbelt and distracted driving enforcement.

Approved an ABC License for a Liquor Store at 1240 Spring St. Council determined that Public Convenience or Necessity would be served by the issuance of a Type 21 ABC license for the business to be located at 1240 Park Street, permitting a new liquor store at that location.

Discussed Community Facility Districts. Council discussed guidelines and policies to regulate Community Facility Districts (CFDs). CFDs allow for financing the construction of public infrastructure and certain services. They impose a special tax on future property homeowners within the CFD boundary through an annual levy collected on the property tax bill. Council last established guidelines and policies governing the use of CFDs in Paso Robles in 2004, and anticipate updating these policies in the near future.