Council supported the idea a zoning amendment, but sent it back to the Planning Commission to be re-drafted to possibly encompass a wider area

At the March 17 Paso Robles City Council meeting, the council considered a request by Joey Blagg, on behalf of Lucky Luke’s Foods, Inc., to amend the Uptown Town Centre Specific Plan to expand the boundaries where a drive-through restaurant may be conditionally-permitted in the Town Centre-2 (TC-2) zoning district. Lucky Luke’s, Inc. owns the property located at 2244 Spring Street and would like to renovate the existing building into a Little Caesar’s Pizza drive-through take-out business.

The specific plan states that the current uses within the TC-2 zoning areas are generally “developed with strip centers and other suburban types of commercial buildings that cater to the automobile; many properties are under-developed, with substantial portions either vacant or used for parking. Most of the buildings are unremarkable in historic value. The intent of the TC-2 zone is to create relatively high density, mixed-use neighborhoods.”

At a meeting on January 27, 2015, the Paso Robles Planning Commission recommended on a 3-2 vote that the council deny the code amendment request. The basis of denial was related to the site being limited in size, having an irregular shape, and questions on the circulation pattern.

The proposed code amendment is ultimately the discretion of the council. If the code amendment is approved, then the conditional use permit can be scheduled for review by the planning commission where site planning, circulation and architectural elevations can be addressed. 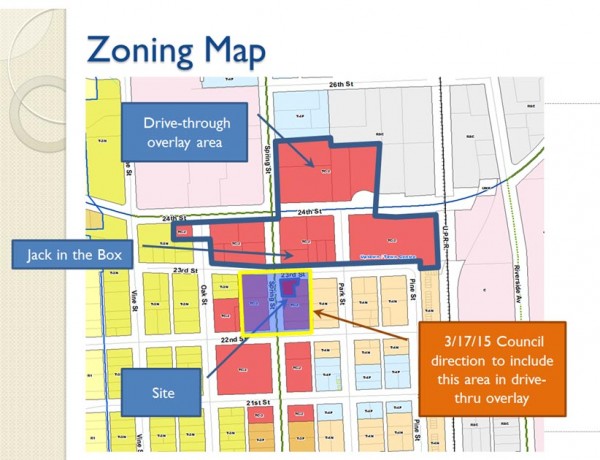