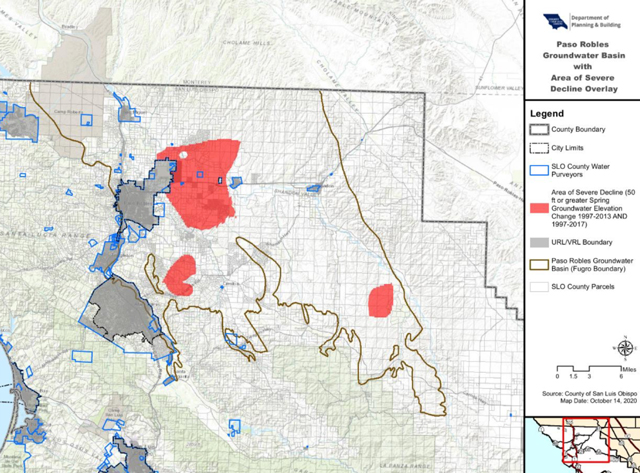 –This week, the San Luis Obispo County Board of Supervisors modified “red zones” for water management in the North County.

The red zone is defined as any property which has experienced a 50-foot drop in well-water elevation levels over the years from spring 1997 to spring 2013, or spring 1997 to spring 2017. People moving out of red zone restrictions will only be allowed to use five-acre feet of water. That’s enough water to operate a small farm. Each free-standing house uses an average of 2.5 acre-feet of water.

Because of new data on water levels, the county removed 37,000 acres from the red zone. Another 25,000 other acres were placed in the red zone because they’re experiencing a severe decline in their water levels.

Supervisor John Peschong says well water levels may vary dramatically in different areas of the North County. For instance, one property owner in San Miguel notified the county he had been placed in a red zone, but his water levels have stayed consistent for more than 20 years. So, his property was reclassified and removed from the red zone.

Peschong says, “We do not allow additional mass amounts of pumping. People should not see their wells drop overnight because of some new agricultural operation in the North County.”

Supervisor Peschong encourages people to contact him if they experience a severe decline in water levels.

The vote to alter the red zones passed 3-1 with Supervisor Bruce Gibson casting the lone dissenting vote. The former oil company geologist objected to changes in the red zone because he fears it will facilitate major water pumping from the aquifer. Supervisor Debbie Arnold said that any increase would be minimal because of the five-acre feet restriction.