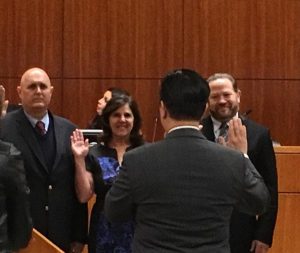 Peschong takes over for Supervisor Frank Mecham, who is stepping down after two terms. Mecham told a packed house that he’s proud to have served his country in the US Navy, his hometown as mayor and the North County as a supervisor representing the 1st District. He says he’s going to spend more time working on household projects with his wife.

Peschong says as supervisor he plans to work to reduce government spending and regulation. He said that he wants to create a smaller and more efficient government, lower taxes, and create a government that allows for more personal freedom. Peschong beat Paso Robles Mayor Steve Martin in the general election to win the 1st district supervisors seat.