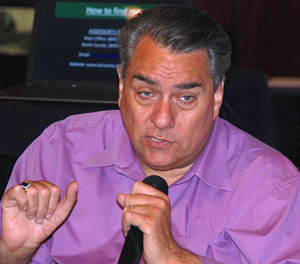 In his run up to re-election, San Luis Obispo County Tax Assessor Tom Bordonaro visited the Paso Robles Rotary Club last week and gave an update on what’s new at his office.

Bordonaro says there are a number of challenges in tax assessments. With a staff of 80, the assessors office did over 100,000 valuations in 2012, up from 66,000 in 2008. The valuations include those that go up in value and those that go down based on the economy and other factors. In addition, various state propositions and laws drive the changes in valuation, the rules under which valuation changes can take place, and various exceptions that are allowed.

Proposition 13, 8, 58, an 60 are among the most significant in affecting property valuations. Prop. 13 retains values to 1975 rates if there has been no change in ownership. Prop. 8 was enacted in 1978 to valuate property based on the lower of Prop 13 or market values. It also provided for faster assessment changes, whether increases or decreases. Props 58 and 60 implemented tax valuation exceptions for agricultural land (Williamson Act), railroads, utilities, seismic repairs, and solar installations. Although the recent economic downturn reduced County property valuations by 37%, the upward trend has begun with 44,000 reviews already completed in 2014.

Bordonaro’s family background is the Central Coast. He is a Cal Poly grad in agriculture management, a former state assemblyman and assistant minority leader at the State Capitol, member of the State Adult Parole Board, and SLO County Assessor since 2002. He is seeking re-election this year in the June 3 primary and is running un-opposed.