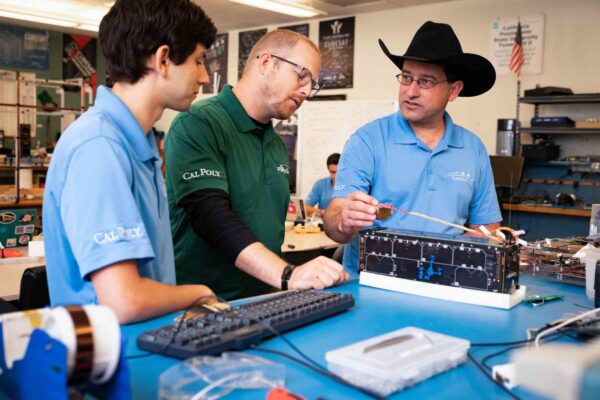 – Mini satellite technology co-created at Cal Poly, which has substantially contributed to the expansion of space exploration and research worldwide, will be inducted into the Space Technology Hall of Fame during the 37th Space Symposium in Colorado Springs April 4-7.

Jordi Puig-Suari, a former Cal Poly aerospace engineering professor, and now-retired Stanford University professor Bob Twiggs created the CubeSat platform, a class of research spacecraft built to standard dimensions (units or U) of 10 cm (about 4 inches) per side, as a teaching tool in 1999. Initially intended to give students experience in satellite functionality, the standardization of the invention — they can be 1U, 2U, 3U or up to 16U in size, and typically weigh less than 3 pounds per unit — made it relatively simple and affordable for other schools, governments, and private organizations to create satellites that could be launched into space and used for research.

Puig-Suari compared the invention to a sandbox, where the industry learned to conduct space work in a different way.

“Faster, smaller, taking more risk and leveraging the technological developments of non-space industries, such as the commercial electronics sector — those new ways of doing business that were introduced by CubeSats form the basis of many of the new missions being developed by space companies,” said Puig-Suari, who retired from Cal Poly in July 2018.

CubeSats have become a regular feature of important space missions and developments, including the twin 6U MarCO communications relay satellites that launched from Vandenberg Space Force Base in 2018 as part of the Mars Insight lander mission and the Planetary Society’s two 3U LightSail projects that demonstrated the feasibility of solar sailing propulsion. CubeSats are also regularly launched from the International Space Station.

“Not only have thousands of students from all over the world been able to launch a satellite, it has turned into a billion-dollar industry and has played a major part in bringing about a renewed enthusiasm about space that hasn’t been there since the Moon landing,” said Ryan Nugent, director of the Cal Poly CubeSat Lab.

According to the Nanosats Database, the largest organized collection of information for launched, planned, and canceled CubeSat missions, more than 1,660 CubeSats have launched to space as of Jan. 1, 2022. The database estimates that more than 700 are planned for this year alone, including over 300 from companies. And it all began with Cal Poly.

“Any discussion of the evolution of CubeSats should include Cal Poly’s prominent role,” said John Bellardo, a computer science professor and faculty advisor to the program.

The induction from the Space Foundation, whose leadership includes a former NASA astronaut and several space industry executives, does just that — and more.

“This distinction is also a validation of the idea that the ‘traditional way of doing things’ isn’t always the best and can be an inhibitor to innovation, which we hope to continue as we strive to provide our students with hands-on experience with cutting-edge space technologies,” said Nugent, who worked on CubeSats as an undergraduate and graduate student at Cal Poly. 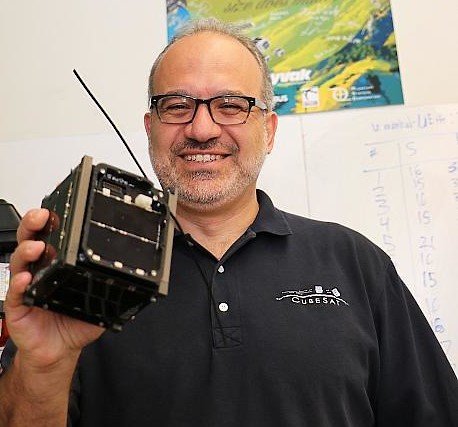 Last year, a CubeSat launched on a Virgin Orbit rocket released from the wing of a Boeing 747 was the 12th mini satellite designed, assembled and tested at Cal Poly that has been launched into space. One of the current CubeSat projects will look at a new radiator technology.

“The radiators are a critical component of spacecraft because they allow waste heat to be rejected from the vehicle, a necessary process for both higher-powered missions and missions that operate in a hotter environment for an extended period of time,” Bellardo said.

Helping future missions, an upcoming partnership with the Air Force Research Laboratory will provide access to newer equipment, facility upgrades and experts in the field.

“While we proudly claim a major role in the advent of the CubeSat, we want to remain relevant with this important technology,” said Associate Dean Eric Mehiel, an Aerospace Engineering faculty member who plans to attend the induction ceremony with Puig-Suari. “This partnership will help Cal Poly continue to push CubeSat innovation well into the future.”