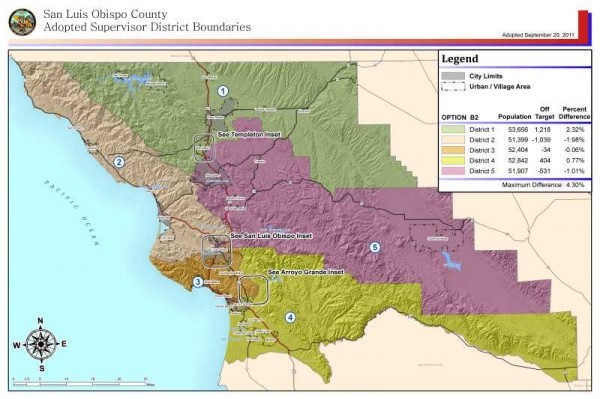 Cuesta College is seeking appllicants for an open board of trustees position. Applicants must live in District 5, the purple area above.

The Cuesta College Board of Trustees has a vacancy due to the resignation of District 5 Trustee Gaye Galvan, a board member since 1996.

The college is soliciting applications to serve as an appointed member of the Board of Trustees until the next regularly scheduled election for governing board members in November 2014. The appointed trustee must run for the District 5 seat in November 2014, should he/she have a desire to continue to serve on the board. The successful candidate of the 2014 election will fulfill the remaining two-year obligation of the District 5 trustee, whose seat is up for regular election in 2016. Please note that the college district took action in 2013 to move to by-trustee area elections and adopted the San Luis Obispo County Supervisorial District Map. Eligible candidates must reside in District 5, which is the same as San Luis Obispo County Supervisor Debbie Arnold’s district.

The governing board is responsible for the performance of Cuesta College, which provides vital educational services to local communities and throughout the region. The SLOCCCD Board of Trustees is seeking candidates who have the ability and time to fulfill the responsibilities of being a member of the board, which includes, but is not limited to:

• Participate fully in the work of the board, which includes attending all board meetings and key college events, studying and discussing policy issues, and participating in trustee education programs.
• Be knowledgeable about the communities served by the college and be willing to act on behalf and for the benefit of those communities.
• Be committed to community colleges and their missions; understand educational, social, and economic policy issues.
• Engage in balancing the needs of many diverse groups; be able to contribute to and build consensus.
• Contribute to effective board functioning and support the authority of the board as a whole.

The Board of Trustees meets the first Wednesday of every month at 2:30 p.m.

Please contact the Cuesta College Superintendent/President to indicate an interest or suggest possible candidates for the position at 805-546-3118, The application/ statement of interest regarding this vacancy is available online at; http://www.cuesta.edu/aboutcc/planning/boardtrustees/.

Applications are due no later than 5:00 p.m., March 6, 2014. The board will interview and make the provisional appointment on March 11, 2014, in an open session special meeting.

Submit applications and additional information via:
• Emailed (preferred) to Todd Frederick, Executive Assistant to the SLOCCCD Board of Trustees; tfrederi@cuesta.edu
• Fax 805-546-3907, or
• Mail

The San Luis Obispo County Community College District’s (SLOCCCD) longest serving member of the current Board of Trustees has resigned. Gaye Galvan, who was elected as a Trustee for District 5 in 1996, submitted her resignation effective February 6, 2014, due to health reasons to the San Luis Obispo County Office of Education on January 21st. The 1975 graduate of Cuesta College and longtime resident of Atascadero officially participated in her last Board meeting on February 5th. Her current term would have ended in 2016.

During Galvan’s more than 17 years serving on the Board, she was involved in taking action on crucial matters involving state budget cuts, the growth of the North County Campus, accreditation actions, and the Cuesta Promise Scholarship.

“Gaye Galvan epitomizes volunteerism at the highest level,” said Cuesta College Superintendent/President Gil Stork. “Her commitment to education for all citizens of San Luis Obispo County is unmatched. I have such admiration for not only her passion for the importance of education, but the enthusiasm and spirit she brings to her many service roles. Gaye has certainly left an important legacy of selfless service to Cuesta College, and our students are the direct beneficiary of that legacy.”

According to California Education Code, Section 5091, in order to fill a vacancy, the SLOCCCD Board of Trustees must either call for an election or make a provisional appointment within 60 days of the vacancy. At the Board meeting on February 5th, the Board voted to move forward with making a provisional appointment and has begun the process of soliciting applications from individuals interested in serving as an appointed member of the Board of Trustees until the next regularly scheduled election for governing board members in November 2014.

Galvan joined the U.S. Marine Corps in 1959 and served until 1966. She has been highly involved in supporting education for decades and, since 1981, has been a member of both the San Luis Obispo County Board of Education and the SLO County School Boards Association Board of Directors, serving as president of the SLO CSBA from 1982-1994. She has been recognized with the 29th Assembly District Woman of the Year Award in 1991, the Grace Mitchell Lifetime Achievement Award in 2002, the National Guard Lifetime Achievement Award in 2007 and the President’s “Service to America” Award in 2007 for more than 4,000 hours of volunteer service.