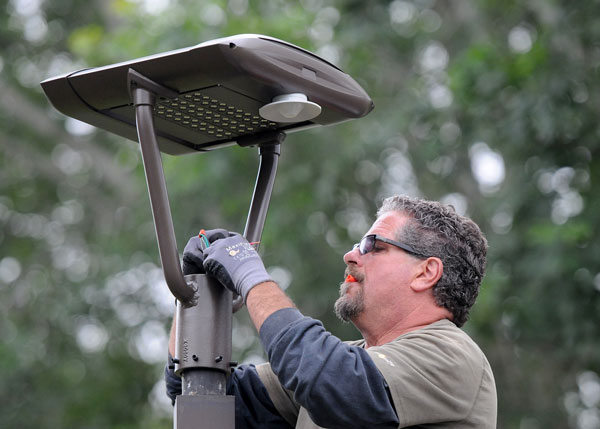 Cuesta College has developed an energy savings project that will make the San Luis Obispo Campus more energy efficient for the next 20 years and save the District hundreds of thousands of dollars in energy savings costs. The project is the result of funding from Proposition 39: California Clean Energy Jobs Act and will come at no cost to the college.

While working within the constraints of Proposition 39, Cuesta College is in the process of retrofitting 90 percent of the SLO Campus’ exterior pole lighting fixtures from their current High Pressure Sodium format to Light Emitting Diode (LED). This will result in an estimated annual energy savings of $22,000, an estimated energy savings over the life of the fixtures of $440,000 and an estimated net energy savings to the District of $406,000. The estimated project cost is $341,000, which will have no negative impact on the college’s general fund.

“The lights we are installing use 50 percent less power in their normal usage at night, and 75 percent less power during their unoccupied mode during the late night and early morning hours when no one is on campus,” said Terry Reece, Cuesta College’s director of facilities services planning of capitol projects. “Not only are these lights more energy efficient, they will also produce less light pollution, giving the campus a more pleasing white glow.”

Proposition 39 allocates revenues to local education agencies to support energy efficiency and alternative energy projects, along with related improvements and repairs that contribute to the reduced operating costs and improved health and safety conditions in public schools. Additionally, the implementation of Proposition 39 monies ends up creating energy savings job opportunities in California. In September 2013, Cuesta College applied and qualified for Proposition 39 funding. Based on Cuesta’s enrollment, the school received an allocation of $312K, along with an energy incentive of $30K from PG&E. All of the funding is being used for the LED retrofitting project, which is due to be completed by Thoma Electric by May 15, 2014. The entire project length is approximately 16 weeks. The North County Campus is expected to be retrofitted via a 2014 allocation.