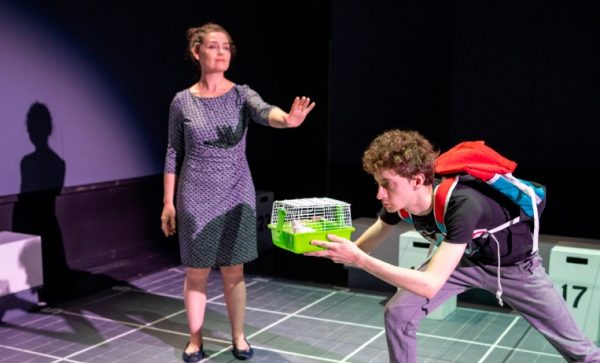 The Curious Incident of the Dog in the Night-time made its Cuesta College premiere in Dec. 2022 to sold-out performances.

Festival will be held in Las Vegas from Feb. 13-17

– Cuesta College’s Theatre Arts Department has been invited to compete at the 2023 Kennedy Center American College Theater Festival with their production of the Tony Award-winning play The Curious Incident of the Dog in the Night-time. The festival will be held in Las Vegas from Feb. 13-17.

The Curious Incident of the Dog in the Night-time made its Cuesta College premiere in Dec. 2022 to sold-out performances. Bree Valle directs the Broadway adaptation of Mark Haddon’s best-selling novel.

Fifteen-year-old Christopher has an extraordinary brain; he is exceptionally intelligent but ill-equipped to interpret daily life. He sets out to identify the true culprit when he is accused of a crime, leading to an earth-shattering discovery and a life-changing journey.

To prepare for the festival and to raise necessary travel funds, Cuesta College Theatre Arts will remount the production at the Harold J. Miossi Cultural and Performing Arts Center (CPAC) Experimental Theater for a limited six-show run on the following dates and times:

The show has a run time of 95 minutes with a ten-minute intermission. General admission tickets are $25 plus processing fees. Purchase tickets online at tickets.cuesta.edu. Guests should check the webpage for age, visual, and emotional trigger warnings. To make a donation, visit the Cuesta College Theatre Art’s fundraising webpage.

Valle says she is thrilled to remount the show and raise funds to bring the entire company and production across the country and perform at this year’s festival. “It is about the importance of this wonderful play,” she said. “It is about the contribution this show offers to our national discussion about neurodiversity. It is also about offering our students this unique opportunity to perform on a national stage – and connecting them to the theatrical world outside of SLO County.”

The festival selects a few noteworthy productions from across the United States’ western region, including Arizona, Central and Southern California, Guam, Hawaii, Southern Nevada, and Utah, to restage their shows for professional colleagues and student peers at the regional competition.

“This means the entire production, including sets, lighting, costumes, and properties (along with the cast and crew), will travel to the host city and the entire show is loaded into a performance space in a matter of hours. It is really an entire production in itself – and a bit of madness!”

This is Cuesta College Theatre Arts’ fifth time representing the western region of the United States at the festival, beginning in 2014 when the original play pool ’63 received five national awards. The Kennedy Center also honored the college’s productions of Refried Elvis (2016) with six awards and Ghost Ship (2019) with ten awards, including Outstanding Theatrical Creation. In Feb. 2021, Bree Valle received the Kennedy Center Gold Medallion, considered one of the top honors in theatre education.

“The recognition we receive, both locally and nationally, is a gift for Cuesta College and our audience,” said Valle. “This recognition attracts diverse students from across the country to SLO County—to our small but dynamic program. It attracts students keen to embrace a high caliber of training and a powerful sense of identity. Our goal has always been simple: to build empathy and to broaden the ways we consider our complex world. We hope our audiences leave the theatre with a renewed sense of wonder and a deeper understanding of what connects us to our shared humanity.”