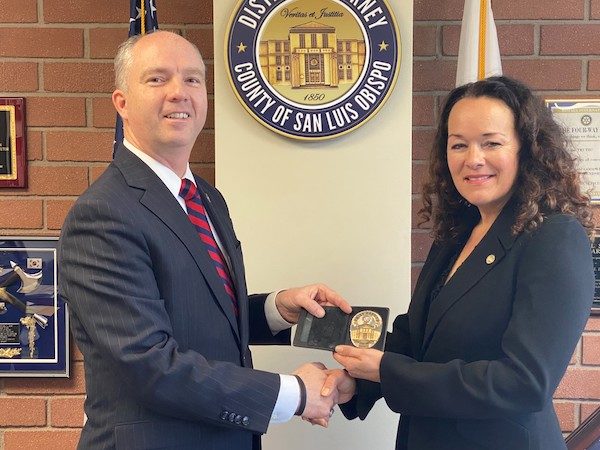 –San Luis Obispo County District Attorney Dan Dow recently announced that Lisa B. Muscari has been promoted to the position of Chief Deputy District Attorney. The position is one of three chief deputy district attorneys who collectively oversee 110 employees including 38 lawyers, 16 investigators, 17 victim advocates, and 39 additional supporting staff. The office reviews and prosecutes between 12,000 and 14,000 criminal cases each year. The appointment was effective Sunday, Jan. 26.

“Chief Deputy Muscari’s extensive leadership experience, obtained while serving in the United States Marine Corps and in the San Bernardino County District Attorney’s Office, makes her an exceptional addition to our management team,” said District Attorney Dan Dow. “Chief Deputy Muscari is an exceptional advocate in the courtroom and her passion to seek justice for the vulnerable in our community is obvious.”

Muscari has most recently been assigned as a member of the Sexual Assault Prosecution Unit where she has distinguished herself by successfully prosecuting child molestation and sexually violent predator cases.

After law school, Chief Deputy Muscari was commissioned in the United States Marine Corps as a Judge Advocate Officer (military lawyer) where she served in various roles including: Defense Counsel, Trial (Prosecuting) Counsel, Legal Advisor on a variety of practice areas, Company Commander, and Head Base Prosecutor at Camp Pendleton and Twenty-Nine Palms. Muscari attained the rank of Major during her eleven years in the US Marine Corps. She tried 20 General Courts-Martial, 26 Special Courts-Martial, and conducted many contested administrative hearings. She was assigned to numerous leadership positions where she successfully supervised law centers with a staff of up to 40 subordinates.

After her military service, Chief Deputy Muscari served as a Deputy District Attorney at the San Bernardino County District Attorney’s Office from 2008 through April 2018. While there she prosecuted 48 misdemeanor jury trials and 38 felony jury trials, including 5 murder trials. She was assigned as the lead prosecutor for Major Crimes Against Children where she handled several child victim murder cases over three years.

Muscari was hired as a Deputy District Attorney in San Luis Obispo County in April 2018 and has conducted 5 jury trials since then including attempted rape, child molestation, sexually violent predator, and mentally disordered offender. She is assigned to prosecute Robert Kohler for the January 2018 murder of Kristin Marti in San Luis Obispo.