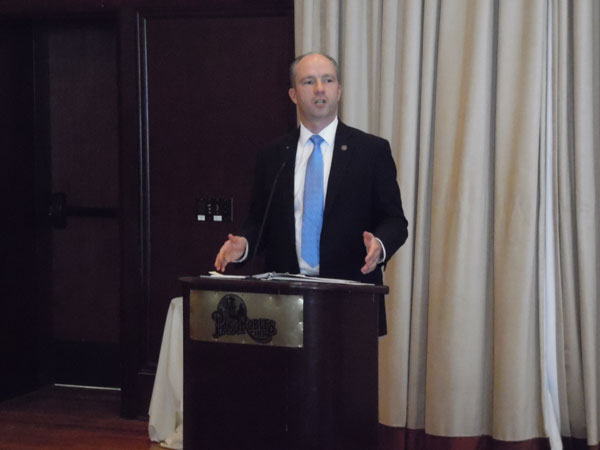 –Recently, the San Luis Obispo Tribune newspaper issued a Public Records Act request seeking copies of internal letters, emails or text messages written by District Attorney staff regarding “Black Lives Matter,” “BLM, “George Floyd,” and “protest” and any responses to those communications. Upon review and upon advice of County Counsel, we are providing one email (and subsequent replies) that was written by a Deputy District Attorney after an office-wide Zoom meeting that was convened to facilitate an internal office conversation about what had been taking place across this country in recent months.

As your District Attorney, I feel it is important for our office to have internal discussions about how we can come together with our community during this time of change across our country. That means having difficult conversations about what we can be doing as prosecutors to build a strong working relationship with our community that reinforces the public trust in our local criminal justice system. After that internal office conversation, as I already mentioned, an email was written by a staff member and sent to all employees of the District Attorney’s Office. The text of the email is published below and a .pdf of the email and responses is linked below. (See images of PDF below)

The mission of the District Attorney’s Office is to bring justice and safety to our community by aggressively and fairly prosecuting crime and protecting the rights of crime victims. The most important part of our mission statement is the word ‘fairly.’ Our difficult work of seeking justice must always be done out of love and care for our community, with compassion, and in a manner that affords justice for all members of our community. It is with that in mind that our office engaged in these important internal conversations.

I lay awake last night thinking about our meeting yesterday and the comments that were made, and I was saddened by the division that has come to the office and amongst my colleagues.

I firmly believe we all came to this profession to do what was right, to seek the truth, to do justice for the victims of crime, to protect our community, to make it safe to raise a family and enjoy the liberties guaranteed by our State and Federal Constitutions. I care for you and I support each and every one of you in this pursuit. I hope I have been a friend. I hope I have been of assistance when you needed it. I know I have my faults, and I apologize for them.

I want to share a little personal background so you know my heart. I grew up in rural Michigan, the son of two teachers. My parents were big supporters of the Civil Rights Movement as expressed by the late Reverend Dr. Martin Luther King. They believed in his vision as expressed in his I Have a Dream speech. That everyone should be judged by the content of their character, not the color of their skin. My father was a special education teacher who specialized in emotionally impaired youth, and worked with juvenile delinquents to help give them the skills to integrate and become productive members of society. I was named after a young black youth who used to hang around the juvenile facility set up by Robert (Bob) Little, Malcolm X’s brother where my father volunteered in the inner city of Lansing, Michigan. Two of my father’s life long best friends were black men, and I grew up playing with their children. They were not black to me, they were my friends. Unique, as every human is unique. Some of my life-long friends are also black, and I have come to the firm belief that they are just people, unique, with their special strengths and faults like any other human being. They are special to me because they are my friends.

So, I come into agreement with the truth that every human life is sacred. That every human being deserves the equal protection and application of the law. I come into agreement that we can always do a better job, that we can grow as human beings and educate ourselves to the special needs of the members of our community. That we can do a better job as prosecutors in the pursuit of truth and justice.

However, I have to express my disagreement with some of the sentiments that were expressed. I do not believe there is anything brave or courageous in leading a large group of people, with the protection of law enforcement officers, onto the highway to hold hostage men and women and their children on the highway. I do not think there is anything praiseworthy in jumping on the hood of a car of a man trying to drive around the blockade and smashing the rear view window of his car with a skateboard shattering glass into the rear seat. I do not think there is anything noble or heroic in yelling “fuck your comfort” to families trying to eat in the local restaurants, or calling officers fucking pigs, and worse. Or gyrating and twerking in short shorts in the street. Or stomping and spitting on the flag (although protected by free speech). I will always personally see my dead friends who served in the Marine Corps – who gave their lives to defend the freedoms expressed by our Constitution. Their coffins were decorated by the same flag that they burn and spit on.

I had a chance to see a real hero this week when Deputy Nick Dreyfus came to a men’s group I attend in Paso Robles at 6 am. Who responded to a call of an active shooter at the Paso Robles Police Department in the early morning hours… Who was shot in the face and still carries the bullet in his neck because the surgeons have not been able to safely remove it. Members of our Investigative Bureau went out to try to apprehend the man who committed these crimes, and at least one was in the line of fire.

He has a family who loves him and they all deserve our respect. My time as an infantry officer in the Marine Corps has taught me that real courage is born out of love. A man fights for the man on his left and the man on his right. I firmly believe that there is no greater love than a person’s willingness to lay their life down for their friends. My heart goes out to the brave men and women of our law enforcement community who go out every day not knowing where their pursuit of the duty to serve and protect us will take them, and their willingness to give their lives to protect ours. The only thing necessary for the success of evil men is for good men and women to do nothing.

I also think the manner in which many of the comments were expressed showed disrespect for the members of our Bureau of Investigation. Many of them served in the various law enforcement agencies in this County before distinguishing themselves and joining our office.

I want to personally thank all the members of our Bureau for the job they do, and the professionalism that I have observed. I have worked in 4 different counties as a Deputy District Attorney, and I truly believe we have the best Bureau of Investigations of any of those counties.

One of the things that has arisen out of the BLM movement is an overt hatred and denigration of those who wear blue, and the advocation and perpetration of violence to those who serve based solely on their profession.

We ask our jurors to be a fair and impartial judge of the facts, to do so without prejudice, bias, or public sentiment. We ask them to apply the law as the judge instructs them using their common sense, and to judge all witnesses by the same standard. Our job as prosecutors is very much the same. In every case I review for filing as the CAPO prosecutor I ask if the officer had a lawful purpose, if they had a lawful right to do what they are doing and a lawful right to be where they were. Was there reasonable suspicion to detain? Was there probable cause to arrest? Did they use reasonable force from the point of view of the objectively reasonable officer knowing what they knew? If the facts support a conclusion that the officer acted out of racial animus, I have a duty to report it as Brady. The vast majority of cases I have reviewed show the professionalism and good faith and restraint of the law enforcement officers in our community. We have had cases where we decided not to file because the officers made a mistake in good faith or the elements described above were not met. There are cases that resulted in internal investigations. I have no reservations about doing what is right.

I look forward to participating in the group discussions, as I have always believed you can’t teach a man that which he thinks he already knows. I am willing to listen and learn, but our decision should always be made fairly and impartially and without regard to public opinion or political affiliation.

To my friends, I care for you all. 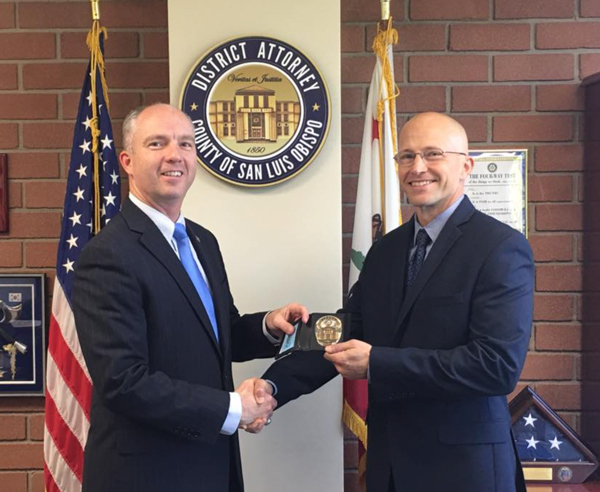 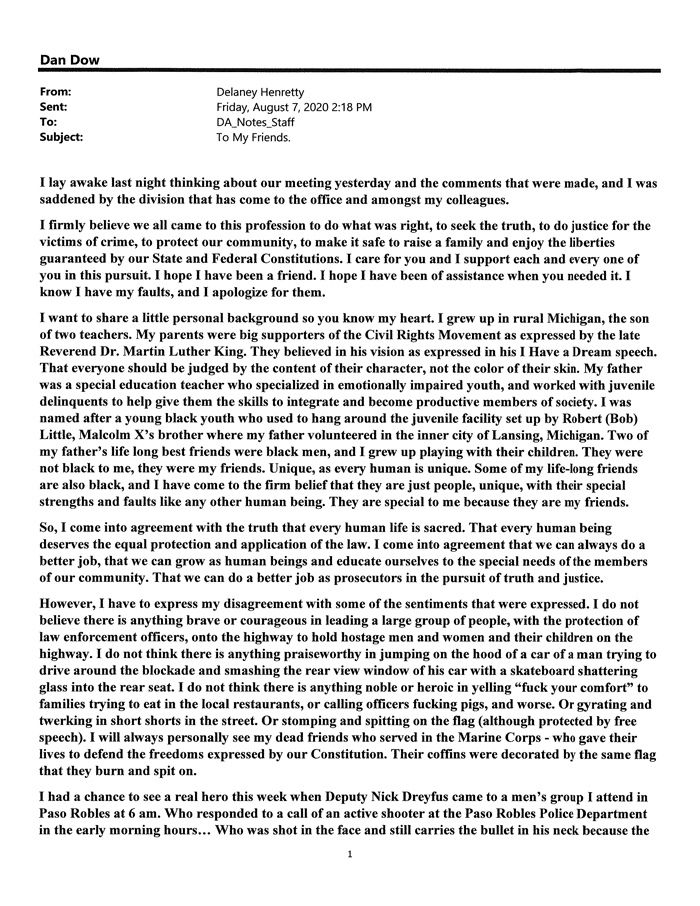 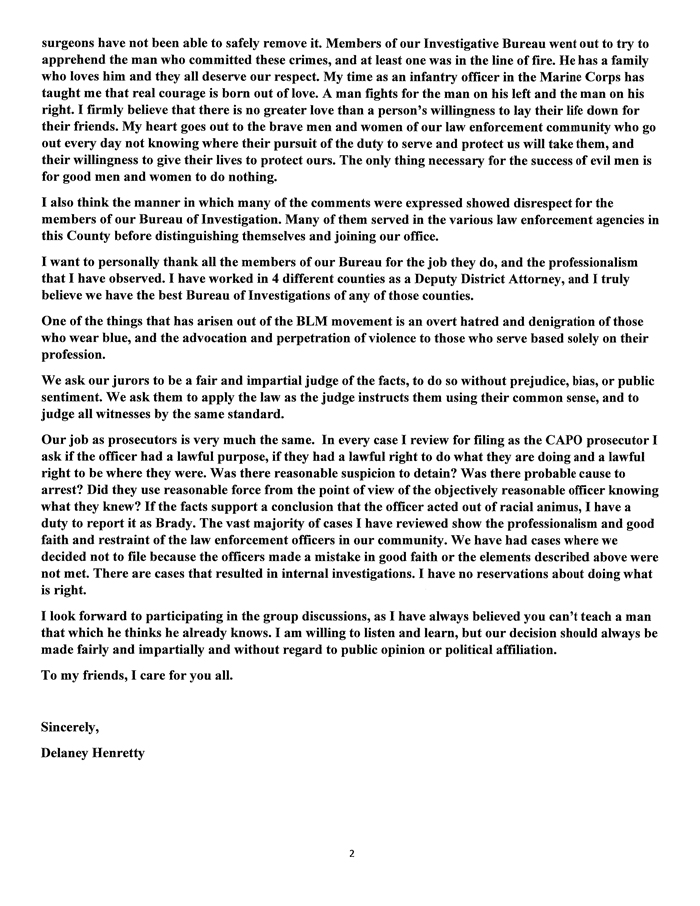 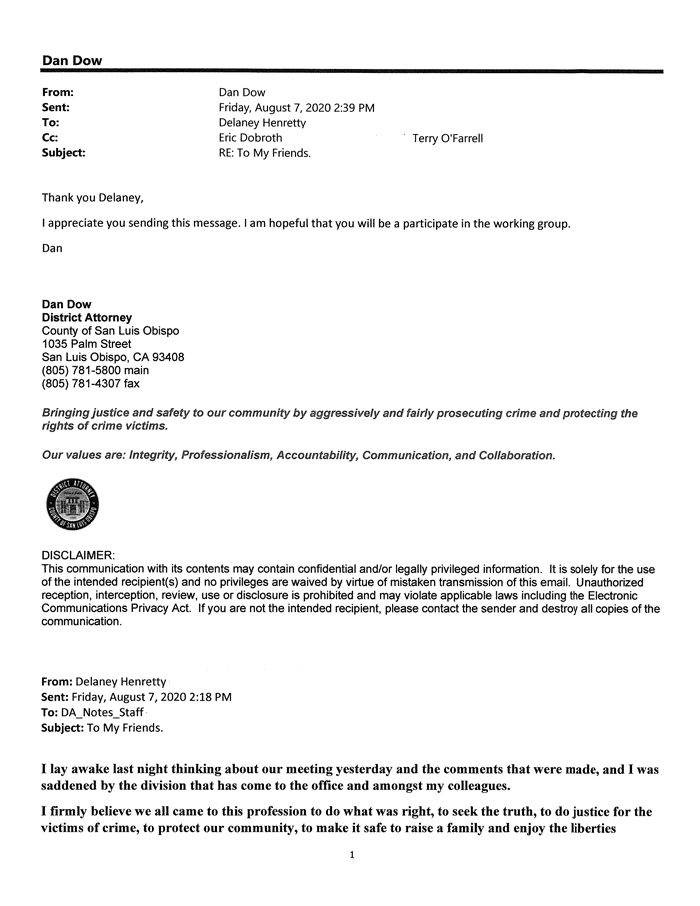 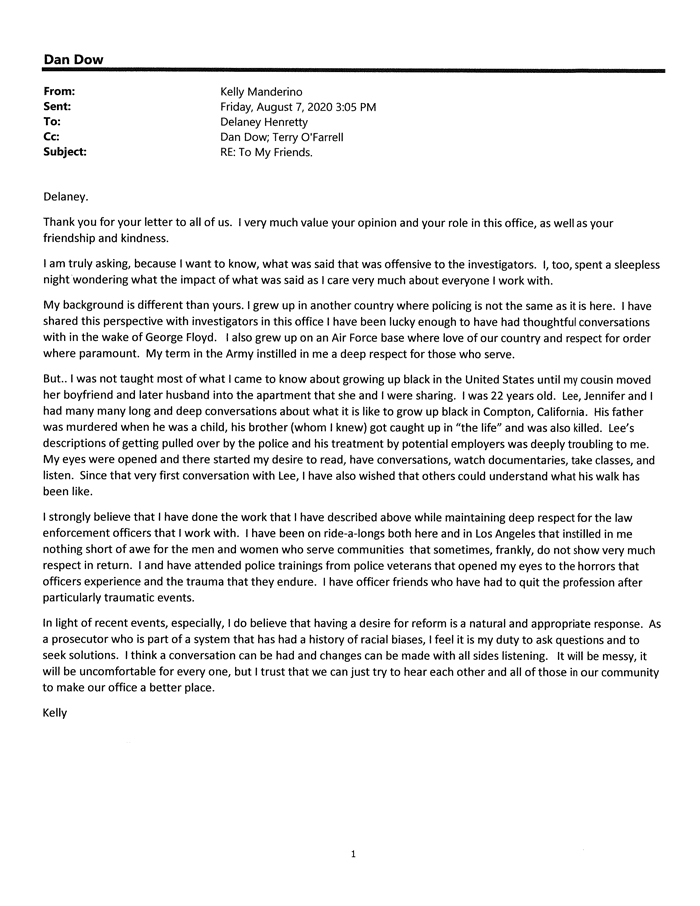 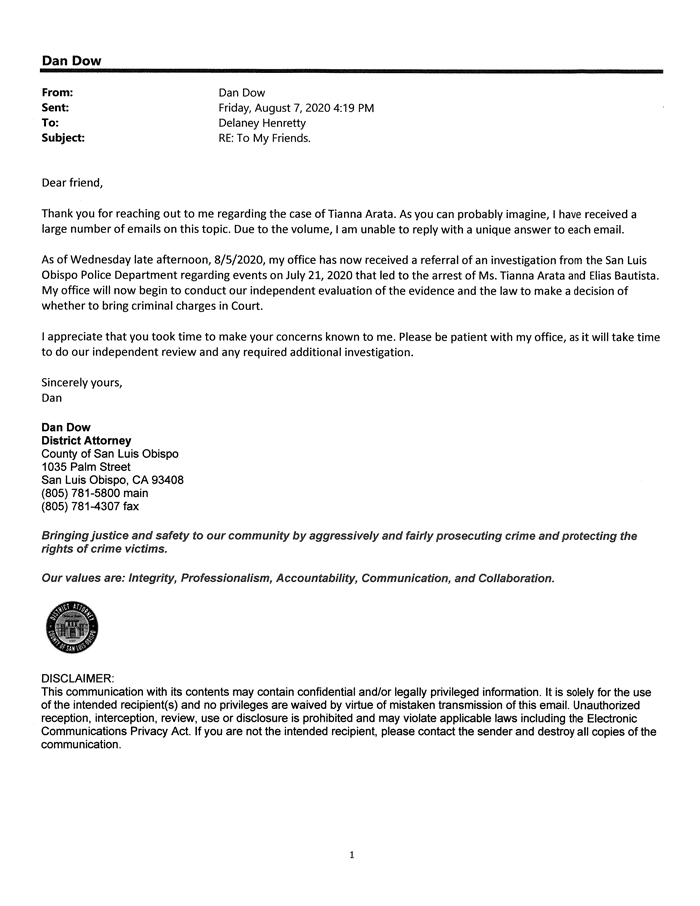 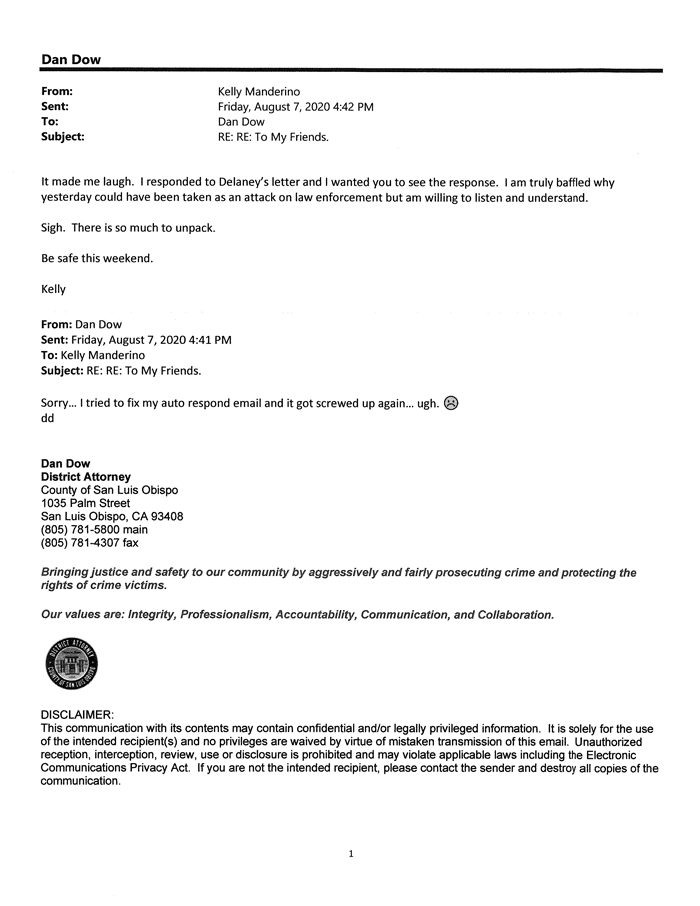 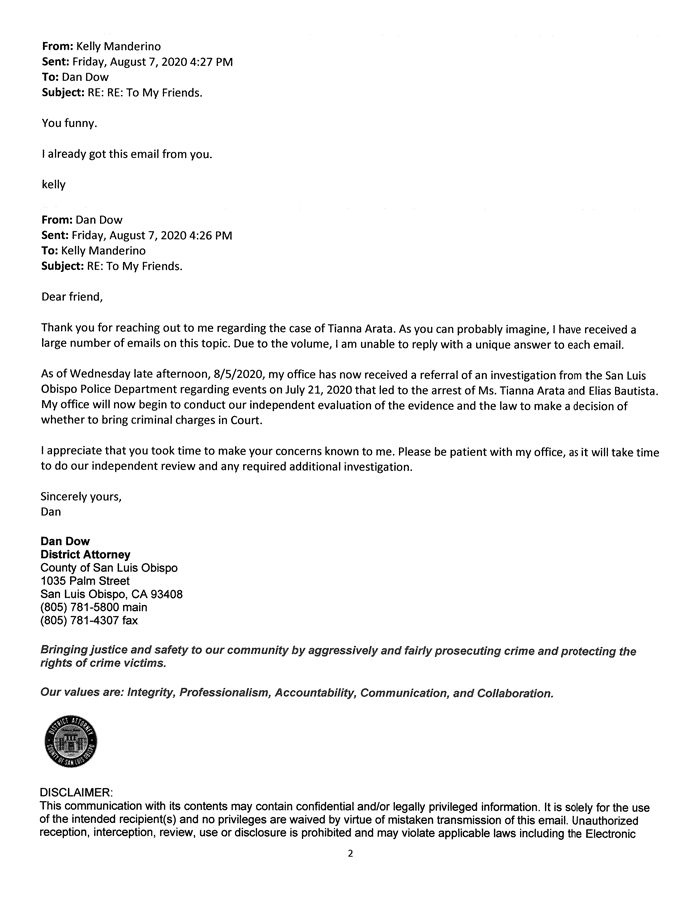