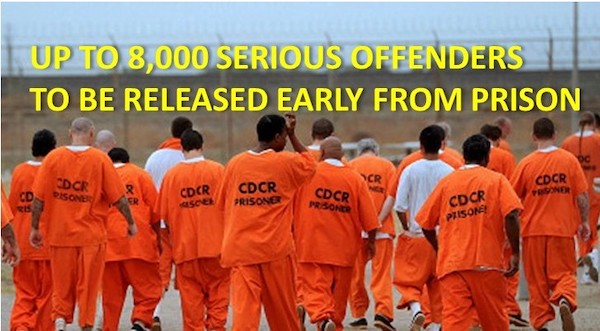 –Today, it was announced by the California Department of Corrections and Rehabilitation that they will implement a new plan to release up to 8,000 inmates who are within one year of their release date. While excluding those inmates currently serving time on ‘violent’ offenses and domestic violence, it remains very likely that many deemed eligible for early release will be career criminals and individuals with prior convictions for violent offenses, thus releasing violent offenders.

Since AB 109 (the California Public Safety Realignment Act of 2011) was signed into law, with very few exceptions, only violent, serious, and sex offenders have been sentenced to state prison. The non-violent, non-serious, and non-sex offenders are not in prison because the Realignment Act in 2011 made them ineligible for state prison sentences and instead serve their time in county jails.

“I am very troubled that victims of crime and other law-abiding citizens who are doing everything they can to follow state and local directives in order to stay safe and healthy will now have to wonder if they will become the next victim of a career criminal who was released early from serving their prison sentence,” said District Attorney Dan Dow. “Our compassion for prisoners cannot outweigh our compassion for victims of crime and law-abiding citizens.”

With the Governor’s approval of CDCR’s decision today to release up to 8,000 state prison inmates early due to concerns of coronavirus, it means that career criminals and those convicted of serious, violent, or sex offenses will be released to communities without having fully served their terms. Inmates with prior convictions for offenses like domestic violence, elder abuse, child abuse, and human trafficking for labor which are not classified as ‘violent’ may be among those released early.

Victims of crime who are concerned about the potential release of a criminal offender are encouraged to contact the Department of Corrections and Rehabilitation to voice your concern.