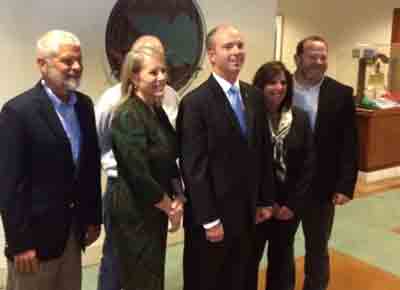 A small group attended the swearing in this week of Dan Dow as San Luis Obispo County District Attorney at the San Luis Obispo Board of Supervisors chambers. Dow was sworn in early because Gerry Shea is retiring early. Dow will take over Nov. 7.

Shea announced in September that after 16 years as DA, he will be retiring early on Nov. 6, before the end of the current term of office. He recommended to the San Luis Obispo County Board of Supervisors that district attorney-elect Dan Dow be appointed to fill out the remaining two months of the term.

Dow was elected in June to replace Shea. “I congratulate Mr. Shea on his retirement after such a long and productive career. Mr. Shea has served our county diligently over the last 37 years and has provided long term stability as the District Attorney for the last 16 years,” Dow said in a statement.