Presenting its critically acclaimed live show to Deadheads both young and old, Dark Star Orchestra is set to perform at the Vina Robles Amphitheatre on Friday, Apr. 10 at 7 p.m. Tickets are on sale through Ticketmaster. 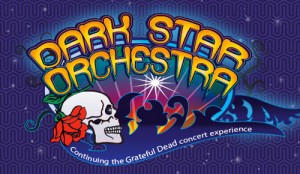 Continuing a long and strange trip since humble beginnings over a decade ago, Dark Star Orchestra’s determined commitment to ‘raising the Dead’ has drawn nationwide attention: “Recreates the Dead concert experience with uncanny verisimilitude… In fact, Dark Star Orchestra often sounds more like the Dead than the Dead sometimes did,” says the Chicago Tribune.

Critics aren’t the only ones singing Dark Star Orchestra’s praises. Numerous original members of the Grateful Dead have played alongside DSO and have had this to say: “A couple of times when I had my back to John onstage and he started to sing, I had this weird sense that it was Jerry,” says Bob Weir, Grateful Dead co-founder/vocalist/guitarist, frequent DSO guest.

Offering a continually evolving artistic outlet within the Grateful Dead’s musical canon, members of Dark Star Orchestra seek out the unique style of each performance era and offer their own interpretations and improvisations at each show.

While faithful improvisation is pinnacle, precision is of equal importance with DSO, which position the stage plot based on the year of Grateful Dead show to be performed, adapting phrasing, voice arrangements, and even arranges specific musical equipment for the various eras of Dead music performed. At the end of each performance, the band announces the date and venue where the original show just covered took place. Dark Star Orchestra dips into every incarnation of the Dead, so most fans can “see” shows that happened long before they were born. Dark Star Orchestra isn’t a cover band. Its shows are not even meant as tributes. What Dark Star Orchestra tirelessly strives for and achieves is a continuation of the spirit of what has now become over forty years of the Grateful Dead’s timeless music.