Dave Agredano nominated as ‘Footprinter Officer of The Year’ 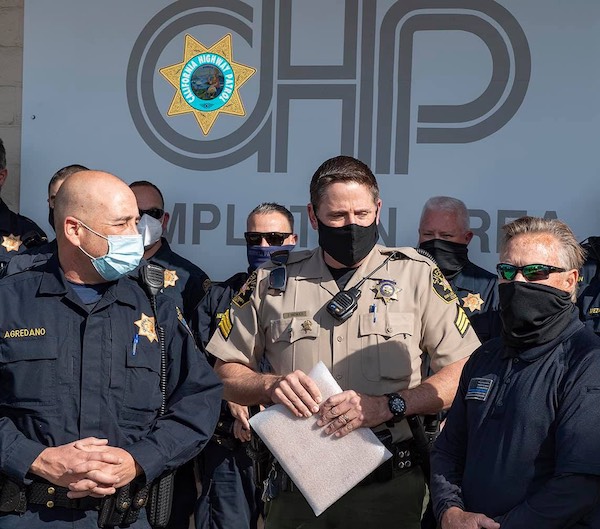 –The Templeton California Highway Patrol area has nominated Officer Dave Agredano of Paso Robles as the Footprinter Officer of The Year.

Sergeant Jeff Nichols of the San Luis Obispo County Sheriff’s Office and Director of the International Footprint Association and Bruce Blair, the President of IFA, presented the award.

Area officers were polled to select their officer of the year. Here is a sampling of the responses received in regards to the selected officer:

“He is not into himself, is willing to help junior officers, and is willing to learn from them too. He is also level-headed and knowledgeable.”

“From the minute / got to the office, I have seen him be helpful to everyone who needs it and he leads by example. Even though he has a ton of time on, he is always super motivated.”

The Templeton CHP Officer of The Year is a balanced individual. He has been instrumental in leading the area through difficult times in 2020 by heading social gatherings (when they used to be allowed) and he was a key catalyst and leader in the phenomenal support of our coworker Pete Kennedy, and the benefit raffle to help him fight back against cancer. The selectee has been a longtime union representative, and peer-support member. Among the staff at Templeton CHP, there are numerous stories of his caring support for his peers and coworkers.

For years this officer has been a drug recognition expert providing area-wide support to DUI enforcement. At the same time, he has personally been recognized by Mothers Against Drunk Drivers for his individual performance in removing impaired drivers from the road. During a recent grave incident involving an active shooter in the Paso Robles Area, this officer responded courageously; protected the public on the day of the incident, and has been a support to officers involved in the incident since that time.

IFA Chapter 73: The International Footprint Association was formed in 1929 by a group of Law Enforcement officials later joined by non-law enforcement citizens and professionals. The original precepts of footprinters and the subordinate chapter were:

Hence the slogan “Bigger and Better Footprints” related to the symbol of Robinson Crusoe finding Friday’s footprints on the beach, depicting the beginning of a relationship that ultimately leads to excellent cooperation between Crusoe and Friday, Law Enforcement and the community they serve. This type of cooperation was the goal of the original eleven Footprint organizers back in 1929 and stands as the symbol today. Sir Robert Peel, the founder of the first Metropolitan Police in London England is famous for his quote, “The Police are the Public and the Public are the Police,” and neither can exist without the other.

IFA Chapter 73 is a subordinate chapter chartered in 1992, consisting of local law enforcement agencies on the CA Central Coast as well as local citizens, professionals, and businesses. IFA Chapter 73 is a non-profit charitable organization defined in Section 501(c)(10) of the IRS Code (Tax ID#47-4222428).

CA Central Coast COPS ‘N KIDS, Inc. (CCCCK): CCCCK is the sister organization to IFA Chapter 73 and was officially certified as a 501(c)(3) non-profit organization by the IRS on August 9, 2006. it shares the same Board of Directors as IFA Chapter 73. CCCCK’s purpose is promoting a partnership with the youth and families and is primarily responsible for hosting the annual CA Central Coast COPS ‘N KIDS Field Day funded primarily via an annual Cops and Kids Charity Golf Tournament.