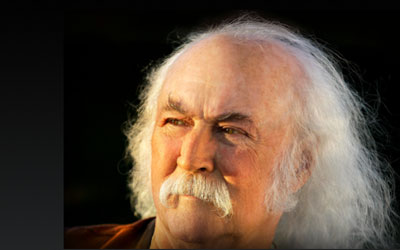 The two-time Rock and Roll Hall of Famer was inducted as a member of both iconic folk-rock band The Byrds—with whom he first rose to stardom—and the iconic Woodstock era-defining group Crosby, Still & Nash.

Crosby’s most recent release, Lighthouse is an intimate, stripped-down set that highlights Crosby’s recognizable voice, incisive songwriting, and incomparable guitar work. The palpable joy in the 9-song collection captures the iconic artist in an unexpected burst of inspiration. For Lighthouse, Crosby received an able assist from Michael League, the bandleader/bassist for Snarky Puppy who executive produced and
co-wrote much of the album with Crosby.

Lighthouse features a rare economy of sound, filled primarily by Crosby’s voice and guitars, and League’s bass. There’s a sparse, unvarnished quality to the tracks that allows the songs breathing room and for the full emotional weight of the lyrics to emerge, unencumbered by extraneous instrumentation.

Tickets go on sale Feb. 3 at 10 a.m. at the Vina Robles Amphitheatre box office during business hours, online at Ticketmaster.com or charge by phone at (800) 745-3000. For more information, visit www.VinaRoblesAmphitheatre.com.