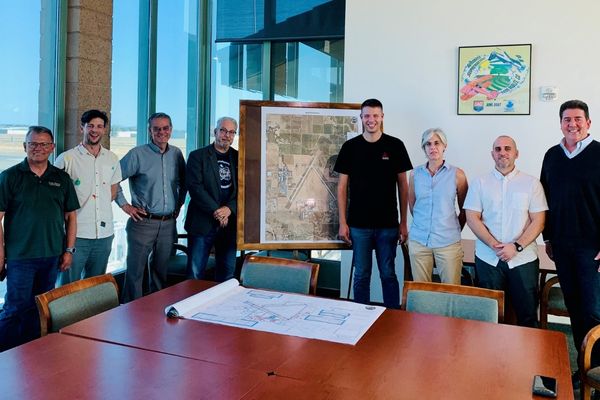 – Representatives of Dawn Aerospace visited with Paso Robles Mayor Steve Martin and city staff recently to discuss working together on the proposed Paso Robles Spaceport at the Paso Robles Airport. Dawn Aerospace is the developer of the Dawn Mk-II Aurora, which is designed for taking off and landing alongside normal aircraft. It merges the world of rockets and aviation. The Aurora is the latest of a series of vehicles that will one day deliver satellites and assets to, and return them from, space.

“Identifying real-world partners such as Dawn Aerospace is a critical part of our spaceport application,” said Martin. “Using their vehicle specifications, we will be able to customize the use of our airport to accommodate these space planes while maintaining general aviation services for regular aircraft.” Martin said city staff is working to draft a letter of intent with Dawn Aerospace.

Martin said the Paso Robles Airport already hosts a busy community of private pilots and corporate jet planes. Its 6,000-foot main runway is more than capable of handling the proposed spaceport traffic and the outstanding local weather provides a fly-able base of operations nearly year-round. These factors, plus the geographic location of the airport among other reasons, make the Paso Robles site desirable to the Dawn Aerospace team. The city is working with Cal Poly to prepare the spaceport license application which should be submitted to the Federal Aviation Administration by May of 2023, according to Martin.

“It’s our intent to use this spaceport, along with a new expanded broadband tech corridor, to develop an entirely new economic sector in Paso Robles offering many high-paying jobs in commercial space exploration and ag-technology,” said Martin.