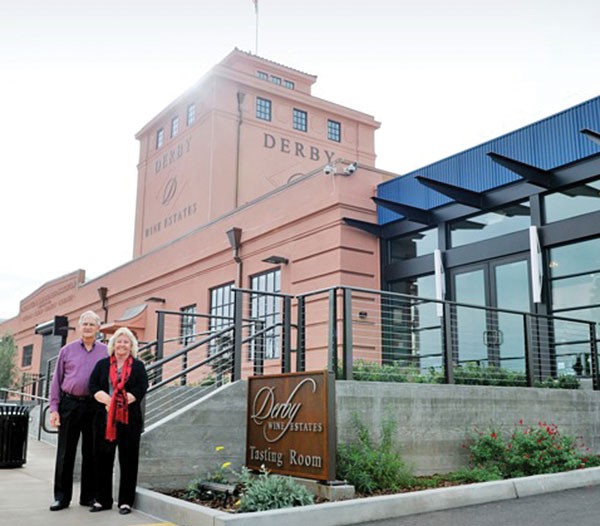 Owners Ray and Pam Derby in front of the restored historic building.

Winery to celebrate anniversary of iconic building with public event

– On Nov. 18, Derby Wine Estates is hosting “Dinner with the Dueling Pianos,” a centennial celebration in honor of the Almond Growers Building. The event is open to the public and will feature a four-course dinner by Chef Charlie (Cass Catering) accompanied by Derby wines and entertainment by Felix and Fingers Dueling Pianos.

The warehouse at 525 Riverside Avenue has been a part of the Paso Robles skyline for a century and has spent most of that time in service to the agriculturalists of this area. It was originally built in 1922 by the Paso Robles Almond Growers Association following nearly a decade of growth for almond farming in the area. The 11,250 sq foot structure of peach-colored reinforced concrete was equipped to process over 1,000 tons of almonds a year and was conveniently located in between the town’s main road and the railroad. It helped put Paso Robles agriculture on the map by significantly reducing the cost and complexity of processing, storing, and shipping local crops and equipping our farmers to handle nationwide distribution. 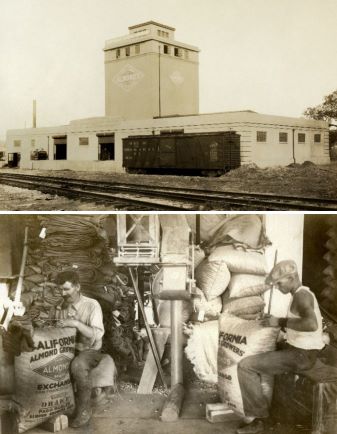 Top: The newly completed Almond Growers building in August 1922 (photo courtesy of the Center for Sacramento History). Bottom: Members of the Almond Growers Association in 1922 packaging Almonds to be shipped across the country.

However, not long after this, grain took over as the principal crop in the area. The facility was sold in 1936 to the local Farmer’s Alliance Business Association for $16,000. It continued its service to local farmers and ranchers as a granary and supply store until 1975. In the 1970s-80s Paso’s golden fields of grain were gradually replaced with rolling hills of grapes. In 2010 the building was once again called into service – this time as a winery – but not before it was recognized for its role in the development of Paso Robles.

In the early 2000s, local residents successfully petitioned to have the site protected for its historical significance. This designation is what caught the eye of Ray Derby – a man with a winery that was outgrowing its current location and a passion for preserving local history. Ray and his wife Pam Derby purchased the building in 2010 and spent four years restoring it. They re-opened the site as the Production Facility and Tasting Room for Derby Wine Estates in 2014, and in 2016 it was officially added to the National Register of Historic Places.

Over the last century, the Almond Growers Building has seen quite a few harvest seasons. It has watched Paso Robles grow up around it and become an iconic symbol of the city’s past, present, and future in agriculture.

More event info can be found at: derbywineestates.com/product/-dinner-with-the-dueling-piano-s