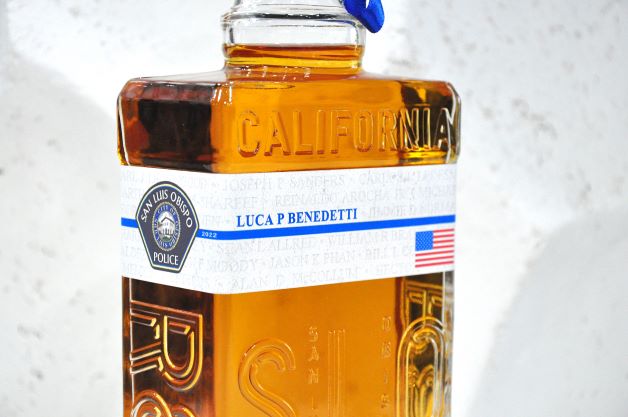 – Central Coast small-batch distillery Rod & Hammer’s SLO Stills has released a second limited-edition bourbon in honor of Detective Luca Benedetti, a 12-year veteran of law enforcement and father of two who was lost in the line of duty on May 10, 2021.

One year later, the anniversary release was crafted with Bill Proll, Retired Lieutenant and current Reserve Officer of the SLO City Police Department, to remind the community of Luca’s sacrifice and the commitment his fellow officers, friends, and family had to each other the following day.

“Our community came together on May 11, 2021” reflected Proll, “This spirit is meant to remind us to hold strong together as we were that day.”

The bottle label design depicts the names of fallen officers engraved in the stone of the National Law Enforcement Officers Memorial in Washington DC, where Luca’s name was added recently, split by a thin blue line. A two-year Straight Bourbon, the whiskey clocks in at a smooth 45-percent alc/vol, or 90 proof, but is designated with a bold “4223 Proof” mark in honor of Benedetti’s badge.