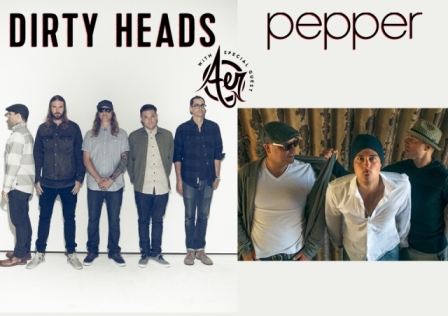 Dirty Heads and Pepper will take the stage with special guest Aer at the Vina Robles Amphitheatre on Sunday, August 10 at 6 p.m. Tickets range from $29-39 plus applicable service charges and are available at all Ticketmaster outlets including the Vina Robles Amphitheatre, located at 3800 Mill Road in Paso Robles. Call (805) 286-3680, (800) 745-3000, order online at www.ticketmaster.com.

For Dirty Heads, the evolution beyond their reggae-rock roots has developed over time and is manifested on their new album, Sound of Change, due out July 8. The album name takes on a literal meaning as the band links up with Grammy award winning producer Supa Dups , Buddah Shampoo, Niles, Ward 21,  and long-time friend and collaborator, Rome. Fine-tuned alternative choruses work harmoniously with hip-hop influenced production that seams the songs together; universal themes of compassion, reflection and happiness are at the core.

“We wanted the songs on this album to touch on the things we deeply care about and the people we are inside” front man Jared (Dirty J) Watson asserts, “but then we want to address the other side – when the weekend comes and we need to let go and just rage.”

After releasing five albums, Pepper has opened a new chapter in their storied career. The resulting self-titled album broadens the band’s style, veering into new sonic territory while still retaining all the fun elements that make the band so beloved by their fans. The ever-present sense of life surges through the tracks, bolstering the sense of optimism throughout.

“This album is basically 12 snapshots of where we are,” vocalist/bassist Bret Bollinger says. “There are songs that will remind you of your favorite Pepper songs, but by the end you’ll hear some unexpected things. You’ll realize that the songwriting is so much more refined. And there’s laughter in the background of the songs. That’s how good the vibe is on the record.”