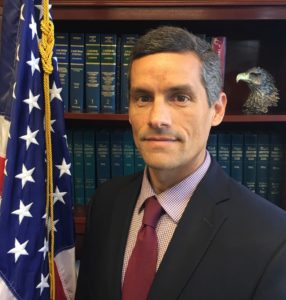 “While Lee leaves big shoes to fill, our office is blessed with a number of exceptionally talented prosecutors who are well qualified to take on this important role,” said Dow. “I am grateful for each of the six internal candidates who expressed a strong desire to help lead this office into the future as we deal with the challenges of increasing crime and a more complex criminal justice system.”

Dobroth has served more than 12 years as a prosecutor in San Luis Obispo County and is currently assigned as the team leader for the Consumer and Environmental Protection / Major Fraud Prosecution Team. He also served as a prosecutor in the Ventura County District Attorney’s Office between 1998 and 2005. While there, he conducted numerous misdemeanor and felony jury trials, prosecuted major crimes and complex white collar fraud cases, and was recognized as Prosecutor of the Year in 2003.

“Eric Dobroth has earned the admiration and respect of his peers, the defense bar, and the judges of the Superior Court because of his strong work ethic, his legal acumen, and his sound judgment. I am confident that he will be an outstanding Assistant District Attorney,” said  Dow. Dobroth is the Chair of the San Luis Obispo County Environmental Enforcement Group and is the liaison to the California Department of Fish and Wildlife and local, state, and federal regulatory agencies. He earned a Bachelor of Science degree in Geology and Environmental Science from Oregon State University in 1995 and a Juris Doctor with emphasis in natural resource law from Northwestern School of Law of Lewis and Clark College in 1998.