The following is a statement from the San Luis Obispo Sheriff’s Office regarding the pit bull incident early Saturday morning:

On Saturday, at approximately 12:30 a.m., deputies responded to a complaint of loud music at a residence in the 5400 block of Whispering Oak Way near Paso Robles. After exiting their vehicle, deputies attempted to make contact with the residents at the front door area of the house when they noticed a large pit bull quickly advancing on them. The dog was barking and acting in an aggressive manner and began circling around the deputies. With his teeth bared, the dog then charged at one deputy and lunged at him from a distance of approximately four feet. The deputy’s partner fired one round at the dog. The dog continued to lunge at the deputy after the first round was fired causing the deputy to fire three to four more rounds at the animal. At that point the dog broke off the attack and retreated to the rear of the property.

The dog’s owner and the owner of the property were contacted and an investigation was begun. We determined there was no related damage to property and the shooting was conducted in a safe manner with the deputy shooting in a downward trajectory at the dog into a grassy area. The Sheriff’s Office offered to assist the dog’s owner by transporting the dog to a veterinarian for treatment but the owner declined. The Sheriff’s Office recognizes the shooting of an animal is unfortunate, however when faced with being attacked, in many cases, it is the only recourse. 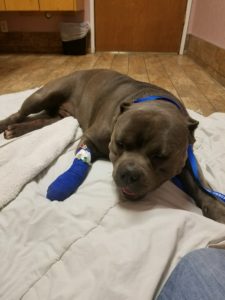 Vet bills could total 10k, according to owner

The owner of the pit bull, named Hercules, shot by deputies at a residence on Whispering Oak Way early Saturday morning expects the veterinary bills to top at $10,000. In a private interview, Marthel Rangel, said Hercules had emergency surgery Monday morning for a ruptured intestine. The dog has been at a veterinary hospital in Atascadero since the incident. Rangel said Hercules will most likely remain there until the end of this week. Rangel said he rushed Hercules to the veterinary hospital right away. The dog was admitted with four bullet wounds and several lacerations.

Reports say that the San Luis Obispo County Sheriff’s Office responded to the residence for a loud music complaint just after midnight, Friday. In a statement to news media, the sheriff’s office reportedly said that deputies shot the dog because the dog was “unrestrained,” “behaving aggressively” and “attempted to attack one of our deputies.”

Rangel said he was in the backyard barbecuing with friends and heard shots being fired in the front yard and came rushing up front to find his dog had been shot. Neighbors also reported hearing shots.

Rangel said he has had Hercules since he was about eight weeks old. Hercules is around 18 months old now. “He is a sweet dog,” said Rangel. The other dog in the household is Peaches, a small terrier mix. Rangel said Peaches and Hercules are best friends and sleep together. Peaches has been sleeping next to the front door instead of in the dog bed since the incident.

The veterinary bills are already over $4000. Rangel said he is not sure exactly how much the bills are at this point because there are emergency procedure charges, daily board, and other expenses like the MRI that found the ruptured intestine that has not yet totaled. “I want the Sheriff’s Office to take care of these expenses,” said Rangel, and is investigating legal resources for reimbursement.