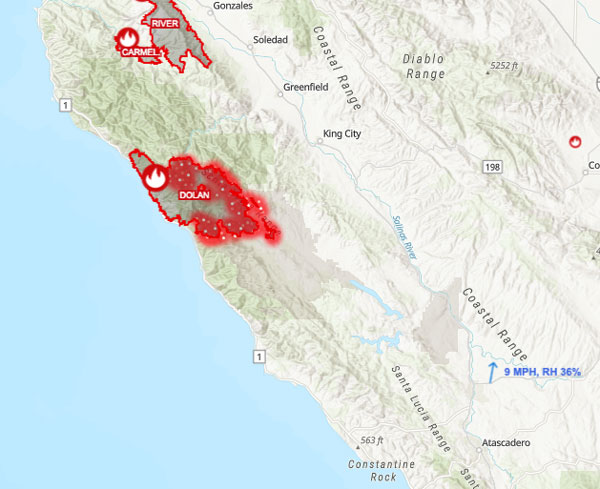 The fort and Los Padres Forest Service will attempt a prescribed burn/backfire between the fire and the base to halt the uncontrolled fire. It will be along Vasquez and Del Venturi Roads. Crews are also improving fire breaks around Mission San Antonio de Padua and around the fort’s buildings outside the fence line, with priority to the housing area. They will also prepare Mission Road for a backfire if those operations don’t stop the fire.

Evacuation center information from Monterey County was given to the fort’s community. If needed, soldiers training at the base will be evacuated to Camp Roberts, and non-essential employees will telework until further notice.

Three firefighters have been airlifted from the Dolan Fire in Big Sur after sustaining serious injuries; one is in critical condition, Monterey County Weekly reports. The three were among 14 firefighters involved in a shelter deployment near the Nacimiento Guard Station at the top of Nacimiento-Fergusson Road.

The Dolan Fire, which began on Aug. 18 near Limekiln Park, 10 miles south of Big Sur has burned 73,089 acres and is 20-percent contained, according to the US Forest Service.

The Creek Fire burning near Shaver Lake has destroyed 60 homes and 20 other structures, according to the US Forest Service. The fire has burned 143,929 acres and is not contained. With assistance from the California Army National Guard, 207 people were evacuated from the area yesterday.

Click here for an update on active fires in California.

Air quality this morning in Paso Robles returned to “good” for the first time in several days. It is expected to be “good” to “moderate” for the next few days. See the current air quality index here.

This unprecedented fire season is a somber reminder that we need to be prepared to quickly evacuate in an emergency. We encourage you to familiarize yourself with the systems that may be used to notify you if an evacuation is ordered for your area at https://t.co/oyYwlDcUmk pic.twitter.com/RG11ItVboQ