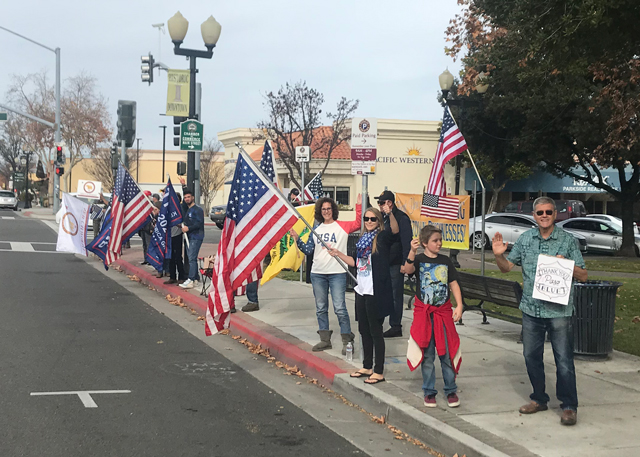 –Dozens of locals showed up to wave flags in downtown Paso Robles on Wednesday afternoon. The rally was announced in advance by Brandon Stier of Paso Robles on the Protect Paso Facebook group. “You can find me proudly waving my Thin Blue Line Flag, and the American flag,” he said, from 12:30 – 2:30 p.m. on the corner of 12th and Spring streets.

“It was amazing to see the love we received from passing motorists,” said Stier, “but also a lot of hate with many middle fingers, spitting at us, and even a gentleman calling us racist and wanting to fight us. But we’re used to that.”

At the same time, rallies were held at several cities throughout the US, including Los Angeles, Newport Beach, Calif., Huntington Beach, Calif., Topeka, Kan., Omaha, Seattle, and a large one in Washington DC that turned violent as scores of some of the protesters broke into the US Capitol building forcing the evacuation of Vice President Mike Pence and members of Congress. Members were in a joint session to formalize Joe Biden’s presidential election.