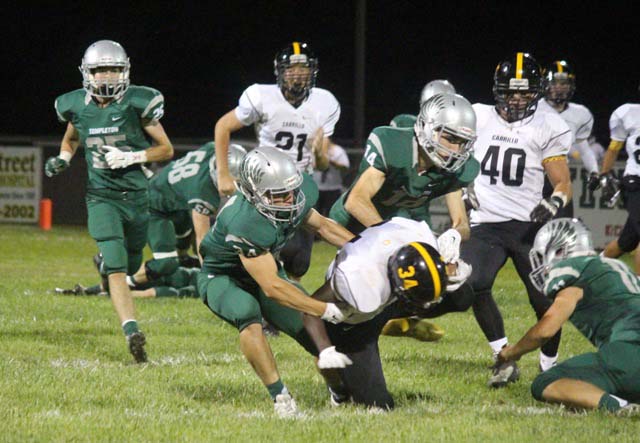 Templeton’s Angel Avelar and Michael Torgenson bring down a Cabrillo player in the Eagle’s tough 31-28 loss to the Conquistadores on Friday night. Photo by Penny Fuentes

– Templeton (4-1) hosted Cabrillo (1-4) in a tough battle Friday night that ended with the Eagles suffering a 31-28 loss to the Conquistadores.

From the opening ceremonies to the final moments of the game, the night was filled with gestures of support for Isaac Lindsey, the Templeton player injured in the Eagles’ games against SLO last week. With the Templeton High School marching band playing, the cheerleaders ran out followed by Isaac’s older brother and teammate, Louis Lindsey, carrying a 32 flag representing his jersey number, and Isaac’s best friend and teammate, Nate Avery, with an Eagles flag as the two led their team onto the field.

The Templeton High School marching band, cheerleaders, and football players take over the field Friday night in a show of support for injured player Isaac Lindsey. Photo by Penny Fuentes

Other shows of support included the Conquistadores presenting a signed number 32 jersey to the Eagles and team fans sporting signs, shirts, and flags inscribed with 32 for Isaac. 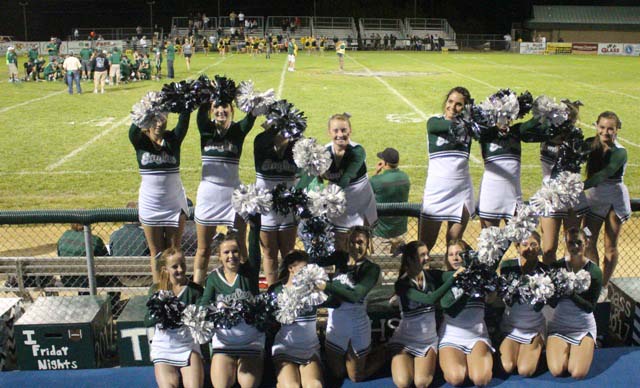 Templeton Eagles fans sported signs, shirts, and flags and the cheerleaders formed figures of 32 at each touchdown in support of injured player Isaac Lindsey. Photo by Penny Fuentes

The first quarter had Templeton’s Jordan Bernal faking a hand-off to run in a touchdown for the Eagles. Just a few minutes later, Cabrillo’s Jalen Howard followed up with a run in to tie the game, 7-7. An interception from the Eagles’ Logan Roth later in the first quarter gave Templeton a 14-7 lead.

Zack Hewitson brought in a touchdown for Templeton in the second quarter, with Cabrillo adding two touchdowns to tie up the score 21-21 going into halftime. 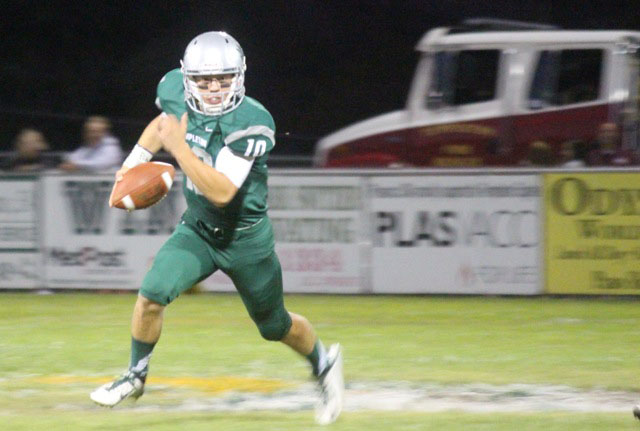 Jordan Bernal makes a touchdown run for Templeton. Bernal finished the night with 12 carries, 43 yards rushing, 10 completions, and a total of 139 yards for the Eagles in their 31-28 loss to Cabrillo. Photo by Penny Fuentes

In the third quarter, Isaiah Harrold had an exciting 99-yard fumble return to give the Eagles a 28-21 lead. Cabrillo took over in the fourth quarter with a safety and last minute Trevaughn Ross touchdown to earn the 31-28 win over Templeton in what proved to be a hard-fought game by both teams.

The Eagles are set to travel to Santa Ynez on Friday, Oct. 2 to take on the Pirates (5-0). The JV players will take the field at 4 p.m. followed by the varsity at 7 p.m.