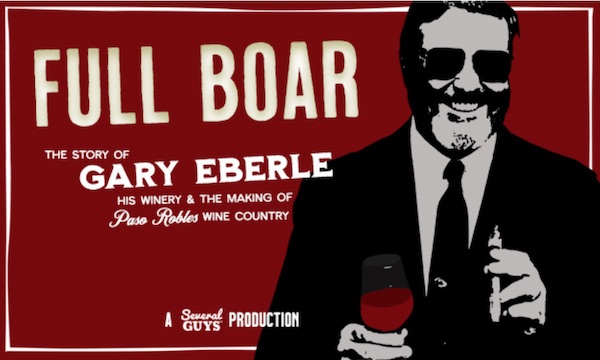 –After being delayed over a year due to COVID-19, “Full Boar” producers are bringing the film to the Downtown Park Cinemas for a special showing during this year’s Vintage Paso: Zinfandel Weekend.

Full Boar was originally produced to commemorate the 40 year anniversary of Eberle Winery in 2019 and was later accepted to the SLO International Film Festival in 2020. On March 19, 2020, just days before its local release, the first lockdowns were put in place pushing off the release date.

Full Boar is an exciting, rock and roll first-person account of legendary Paso Robles winemaker Gary Eberle’s early life and how some of the pieces came together in the early days of Paso Robles wine country.

“Gary’s story is a true manifestation of the American dream, and we are so excited to finally share this with everyone,” says Peter Schroeder, director of Full Boar. “2020 was a wild ride and it’s great that things are starting to open up again”

Synopsis: Overcoming his pre-ordained economic condition growing up in a Pittsburgh suburb, Gary Eberle went on to pioneer one of the most renowned wine regions in the world. From Penn State to UC Davis, follow the story of how Gary left behind his career in cellular genetics to start his Paso Robles Winery, and overcame challenges along the way. A perfect blend of humor and story, Full Boar features interviews from prominent winemakers such as Tobin James, Jerry Lohr, Austin Hope, Janelle Dusi, Chris Eberle, and others. Additional Interviews provided by local media and industry personalities Adam Montiel and July Akerman.

Watch the trailer below: